Thought I'd touch on my novella, My Immortal, this week. This was a favorite to write (aren't they all) and I loved Storm's character. I've told the story about how he informed me he was a vampire plenty of times, but here's some factoids you might not have known....

10. Stevie's name comes from Stevie Nicks. Yup. Can't tell I listened to a lot of Fleetwood Mac, can you?

9. Stevie's name is also what my folks wanted to call me, but my mother outlawed the name. Dunno...guess I don't look much like a Stephanie anyway.

8. Persing is a little tribute to my great gramma. It's her maiden name. 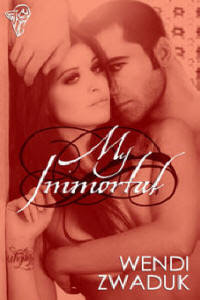 6. I've always wanted a Camaro...so Stevie got one instead.

5. The name Bruce Tripp was snagged from NASCAR. If you watched the Camping World Truck Series, there is a crew chief named Tripp Bruce. 100% honest truth.

4. Storm didn't bother to tell me right away he was from Salem and it was a pain because then I had to research him and listen to him cackle when I got information wrong.

3. There's a driver mentioned in the story, Tucker Poston. He's the very first character I ever came up with for a romance novel. He's also got his own story coming out August 15th from TEB.

2. I found out the editor wanted to contract the story through an IM at 2 AM my time. Yeah, I squeed really softly. Scared the living berserkers out of my BFF when I IM'ed her.

1. Allan and Todd haven't bothered to tell me if they are a couple or not. Todd's response was a grunt and Allan said "a couple of what?" Men. And Gypsy wants to be involved with both, but they aren't exactly sure what to make of her yet.

What’s a girl to do when she finds out the man of her dreams is a 340 year old vampire?

Being a vampire hasn’t been easy for Storm Richardson. He’s not programmed to kill or harm, unless he needs to feed. When he meets Stephanie “Stevie” Persing, he knows he’s found his mate. But if he crosses the line between work and play, he risks losing the only person who matters—her.

Stevie’s been in love with Storm since the moment she laid eyes on him. He’s brooding, intense, and her one weakness. But is her heart too steep a price to pay for his love, especially when she discovers his deepest secrets?

This book contains minimal scenes of rape in a flashback. Includes smokin’ hot sex in a hot tub, a pickup truck, and the shower.

Posted by Wendi Zwaduk and Megan Slayer at 8:40 PM