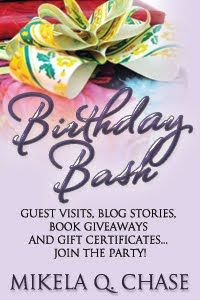 It's a Birthday Bash and the presents are for you. Yep. You can go over to Mikela Chase's blog to read about my favorite birthday memory. Comment there for a chance to win prizes. But then make sure you comment here, first. Why? There's prizes up for grabs here, too!

What do you have to do? Read the excerpt. Answer the question. Leave you name and email so I can draw a winner. What's up for grabs? A backlist title from me! So let's party and get reading. :-)

Bracelet? It took her a moment to remember that women on this planet wore bracelets with charms to denote their status.

“I don’t have one.” She replied letting her voice go smooth and slidey. A past lover told her once that, that particular tone sounded like pure hot sex. From the glow in the man’s eyes it looked like it had the same affect on the men on this planet. “You’ll be mine,” he announced.

A squeak escaped from Rhea when the large man lifted her up and wrapped him in his embrace. Heat juggernauted down her spine with the contact of his soft mouth. Her body melted over him like warmed chocolate. Confident that he could hold her, Rhea just went with it. She would have to find a lover anyways. This way a lover found her. Later she would reflect that rational thought wasn’t her strong suit when large calloused hands were sliding up and down her body.

A whisper of air and a hint of disorientation were the only warnings before she was falling. With a soft oomf she tumbled upon a pile of soft velvety cloths. A quick glance proved she was now on an enormous bed. The large stranger loomed above her. His green eyes watched, bracing himself as if he was waiting for a reaction.

“Teleportation, nice trick.” It wouldn’t do much for his ego to let him know she could do that at six-years old. Most men didn’t want to know that she was far more powerful then they were. It was better to let them be in charge. Well at least feel like they were in charge.

Those amazingly expressive eyes widened. A slow smile appeared. She barely had a chance for it to register before that incredible mouth was on hers again.

The man pumped heat like he was her personal furnace. In a desert that might not be a good thing but in the frigid air-cooled room she pulled him closer with a sigh. She could just gobble him up with a spoon.

Breaking the kiss, Rhea did a little move that a space pirate once showed her, flipping Teven until he was now lying below her.

He laughed, the movement causing him to rub just right against her. “You had me before.”

“Hmmm.” She shimmied down his body and unfastened his pants. Nothing was better than light-hearted play in the bedroom. She got nervous when things got too tense. Intense lovers got possessive. She didn’t do possessive.

With nimble fingers she undid his fly and started to slide his pants off. It took them a minute of not budging before her brain kicked in.

The hard muscled creature beneath her started shaking.

“If you are laughing at me I’ll leave you like this,” Rhea threatened as she pulled off his boots.

A look up through her lashes proved he didn’t look concerned. “Then you’d miss an unforgettable night.”

It was still midday, wasn’t it?

And now for that question: What does Rhea struggle with? Answer in the comments to enter to win a pdf from my backlist! Don't forget to add your name and email so I can get in touch with you. Thanks for entering and playing along! And so you can keep hopping, here's the link to Mikela Chase's blog. Hop! You know you want to!

I hope you meant the Boots?
I think she could handle The other thing she needs to watch when taking his pants off. :)

Liking the story so far...

She struggles with the power of the moons because her powers fluctuate with them.
And his boots at the moment. LOL

She struggles with commitment.
Maybe thats due to her mother wanting her to have a harem of her own, her mothers behaviour, or a bad experience, but it'll be interesting to find out.

Getting him out of his boots also proves quite challenging ;).

She forgot to take his boots off first.

I so can't wait to see what happens with Rhea next..

She struggles with his pants because the boots are still on....well at the moment. But if it just in general she struggles when the moon is up but since they have five its like shes in heat because shes a moon priestess.

Kind of vague because she struggles with the need for sex under the influence of the moon. But with Teven, she forgot to take his boots off first before trying to remove his pants. Laurie P, goaliemom00@cox.net

Not sure, but I'd go with her Moon Powers (needing sex, not wanting a harem). Tera teratopaz@yahoo.com

Rhea struggles with the magic of the moon. She doesn't want to be used by a guy

Rhea struggle with her moon magic and all that entails. She will also be struggling with this guy trying to claim her the next day. Hope this does not cause her sister problems. Thanks for sharing.

I was starting to feel flushed from all the pheromones, lol. Looking forward to the next installment =)

boots, her magic, and getting his pants off fast enough.lol

Well that depends... At present his boots. So far being like her mom and not having one person to love and return that love and overall her magic and the five moons of this planet...

Rhea struggles with the rise of her power(which is moon-based) that is being strongly influenced by the fact that the planet has three moons.

If you mean in this part of the story it's his pants because she couldn't get them off since his boots were in the way but if you mean the story in general then to control her moon magic.

She struggles with the many moons that orbit this planet - and boots:)

Rhea is in a big hurry to get Teven naked and forgets to remove his boots before his pants will come off. Darn. So hard to remember such small things like logic in the heat of the moment. Oh well. Life can get a little messy.

She struggled with his boots in this bit
and with the moons throughout the story so far.

Currently, she's struggling with Teven's pants since his boots are still on. However, she's been struggling with her magic all story long because it's moon based and the planet she's currently on has 5 moons.

Happy Birthday to me! She is struggling with his pants and with the pull of the 3 moons

Rhea struggled to get his pant off, as she needed to remove his boots first. annpa@gmail.com

To get his pants off because she didn't take off his boots first.

And the winner is... renee-moore@live.com.au


Congrats!!
I'll be emailing you shortly!