Thought I'd post a little of the fun thing I've been doing with Kealie. We (I as Megan) wrote a short together. Its not done, but that's okay. We'll get it there. It's titled, Ritual and you can read the beginning right here! 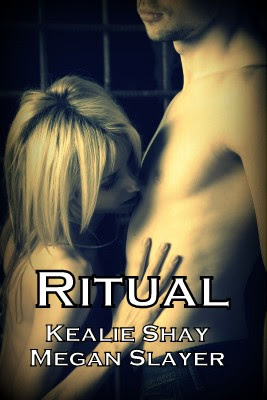 “My Lord! The Lady Cora! She is outside the gates.”

“Well, then let her in!” Dmitri wasn’t at all sure why Carlton was in such a tizzy. “I cannot, she seems to have collapsed at the gates, and I will not be able to gather her in time before the sun rises, my Lord!”

Clarity hit Dmitri like a hammer upside the head. In a blink he passed Carlton in the doorway. “Which gates?” His voice barely an echo as he blew past the old man. “The front, Sir!”

Even though he was already down the hall and up the stairs, he heard Carlton’s words as if the man stood next to him. Dmitri felt the prickle along his back that heralded the beginning of the rise of the sun, and knew, “No time, no time.” He’d never make it to the gates and back inside running.

He stopped moving, took a deep breath, and stood still long enough to focus. Dematerializing he cast his particles through the air to the front gate. He materialized just outside the gates, grateful the sun was still low enough on the horizon to provide enough shade that he could stoop and snatch the bundle of what appeared to be clothing crumpled at the base of the pillars holding the wrought iron gates guarding his compound. He took another deep breath then dematerialized again, holding the precious cargo, before the sun could rise further and burn his sensitive skin.

Dmitri materialized directly inside the front doors of his home. While short exposure to the sun wouldn’t kill him, it would burn a bit. And too long, and he would wish he was dead. Then again, he was old enough the sun didn’t have much effect on him any longer. Cora on the other hand…

Winded he leaned back against the wall beside the door and squeezed his eyes shut as he tried to catch his breath. In his slightly weakened state, he shouldn’t have been able to manage such a feat as two dematerializations in such quick succession, but his powers had a mind of their own when it came to the female in his arms.

Dmitri gained control of his breathing and gazed down at the woman in his embrace. Her face was obscured by the hooded cloak she wore, so he shifted his hold on her to move the folds of fabric that he might see her face. He lost his breath again when he saw the condition she was in.

The normally plump, vibrant woman he knew was nowhere to be found. Instead, in her place was a pale skeletal imitation wrapped in threadbare oversized clothing. Her skin stretched tight over bones and sinew, but the bare evidence of the muscles along her arms told him that she wasn’t yet beyond saving. Her hair, usually a lush and shiny gold, was dry and straw-like in consistency and color.

“Oh, koshka, what have you done to yourself?”