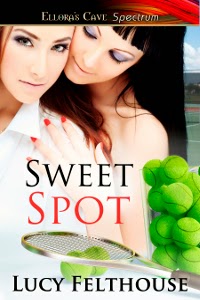 Virginia Miller is an up-and-coming tennis star. She’s gone from a ratty tennis court in a park in south London, England, to the world’s top training facility – Los Carlos Tennis Academy in California. In awe of the talent around her—Travis Connolly, Rufus Lampani and Nadia Gorlando, Virginia is all the more determined to make the most of the opportunity and show that she’s worthy of her place there. Her mentor, Nadia Gorlando, has every faith in her. But Virginia finds herself distracted—Nadia, as well as being a top notch tennis player, is seriously sexy, and Virginia’s mind keeps wandering where it shouldn’t. Will her crush get in the way of her career, or can she find a way to push the other woman out of her mind before it’s too late?

Add to your Goodreads shelves: https://www.goodreads.com/book/show/21521972-sweet-spot 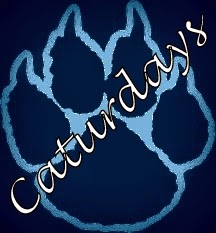 I thought for something new and fun on Saturdays, I'd post pictures of the babies for Caturdays!
For the first post, here's the black cat hanging out. :-) 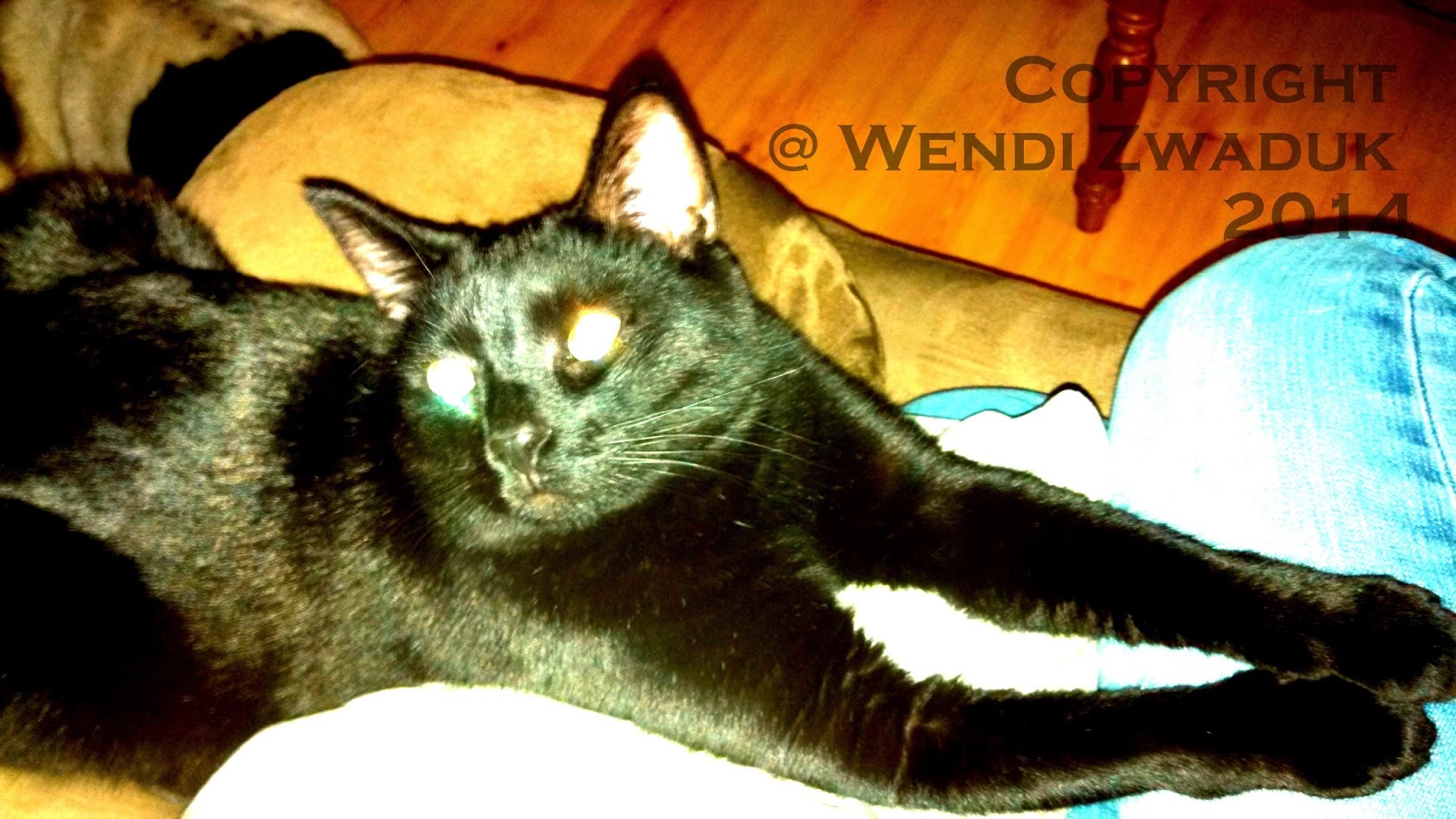 Please do not copy or reproduce without permission.

Posted by Wendi Zwaduk and Megan Slayer at 4:21 PM 0 thoughts from the masses

A Saint's Salvation by Beverly Ovalle!

A Saint’s Salvation was released on February 10, 2014.  It is a military romance near and dear to my heart as I’m a Navy Veteran, my husband is a Navy Veteran and my son is a Marine. He is currently active duty in the Middle East.
My son had gotten a tattoo, St. Nicholas, before he went to Afghanistan. Well, that tattoo just seemed to resonate with me, NOT that I wanted him to get one. But the stark black of the ink against his skin started my brain churning.
I had to write the story. I hope you enjoy it. 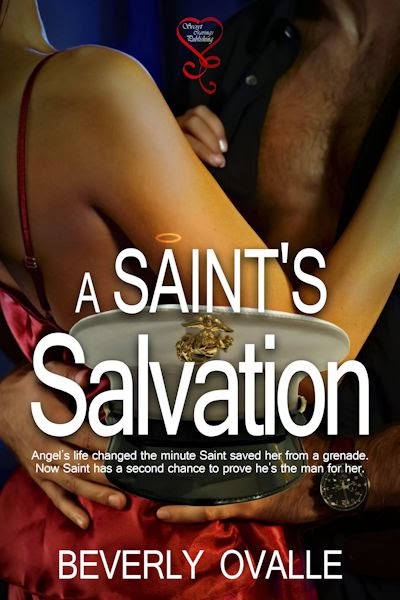 Tag Line:
Angel’s life changed the minute Saint saved her from a grenade. Now Saint has a second chance to prove he’s the man for her.
Blurb:
Corporal Nicholas 'Saint' Santiago needs to go home to reclaim the man he used to be. To be the man he was before Operation Enduring Freedom slowly hardened his heart. He needs to reconnect to the values and the reasons he is doing what he does. Saint also needs to try to forget the courageous woman he knows was meant to be his.
Petty Officer Angelina Jones' life changed the moment Saint saved her life. She survived the blast but now has to deal with the fact that she will never be whole. Knowing Saint received a 'Dear John' letter, Angelina has no intention of being his rebound romance. She needs to be loved for herself. She needs to forget about the one man she knows was meant to be hers.
They each try to find someone to help them forget.
But what does fate have planned for them?

Excerpt:
A shout from Hamilton brought him back to the here and now. “Hey, Saint, do you see any trouble coming?” On guard at the west wall, Nick shook his head. Not that it was much of a wall, a couple of sandbags holding up a makeshift bullet riddled wooden fence, an illusion of safety and security.
“No, it all looks clear.” Well, as clear as normal, Nick thought. The Seabees and the Army Corp of Engineers had done their best to give them a clear line of site, but the rubble of buildings and piles of rock where there used to be a town never seemed to go away. Rebels constantly hid there, randomly firing at their FOB, a forward operating base in Helmand Provence, making it almost impossible to build a more secure perimeter.
Nick could see kids playing in the dirt. In the distance the locals were harvesting the poppy fields. Some of the largest poppy fields in the world were right outside the walls of the FOB. Beautiful when in bloom, they were more pervasive and did more damage than the terrorists.
“Anymore threats?”
“When aren’t there threats?” Every damn day there were threats. “Why, is there a problem?”
“The brass is making noise. When they do something stupid, we end up paying for it.” Hamilton sounded disgusted. As Hamilton spoke, shots were fired over and through the fence, adding more holes to the dilapidated barrier. Nick and Hamilton hit the ground, rolling toward the sandbags to return fire through the cracks. “See what I mean?”
“Yeah it’s been a while since they shot at us, at least a couple of days.” Nick’s sarcasm caused Hamilton to laugh.
“Probably someone is coming to pick up something from the poppy fields and they want to keep us from seeing who.” Hamilton glanced at him. “You doing okay?”
“Gettin’ there. It was just a shock, ya know?”
“Yeah, damn women. The least they could do is be faithful while we’re out here fighting.”
“Yeah, it sucks. I just can’t help thinking it’s my fault.”
“Fuck. How the hell could it be? You weren’t even there. The bitch knew you were gone, were going to be gone.” They fired shots, aiming at the muzzle flash in the distance. More Marines headed their way, sprinting from cover to cover. Perez came running, bringing out ammo and providing more fire power.
Another crack and Perez went down with a cry.
“Fuck! Medic! Man down!” The cry went out, passed through until the call went to the corpsman, while Nick tried to stem the blood flow. Hands pushed his away. Nick looked up. Petty Officer Jones, better known as Doc, had bandages ready.
“Help me roll this on until we can get him out of here.” Her voice sent a ripple through him. Nick had always ignored the attraction he had felt for her. He’d had his girl back home, and fraternization out here could get him thrown in the brig. Not to mention the brig out here was a hell hole.
Nick was leery about approaching Doc now. The Dear John letter had been a shock. He had known Leila for years. Hell, they had been friends since they were little. Her betrayal was unexpected. Nick didn’t even really know Doc. He could trust her with his life, but he wasn’t ready for another go around with his heart, no matter the attraction he felt.
Nick looked toward the fence line, rifle at the ready. Shots were firing sporadically around him. That’s when he saw it, the trail from a grenade launcher, unmistakable. Shit!

Add it to Goodreads:
https://www.goodreads.com/book/show/20623026-a-saint-s-salvation

Fun Facts:
The name was changed less than two weeks before publication!
A Saint's Salvation was inspired by my son's tattoo.
His tattoo says 'St. Nicholas' – the original name of my book.
The name of A Saint's Salvation was my editor's suggestion.
The teasers were made from photos from Afghanistan.
The Marine in the teasers is my son.
He only gave me permission to use his photo because he loves me.
He only gave me permission if I cut off his head! LOL

Author Bio:
Beverly Ovalle lives in Wisconsin with her husband Edmond of 24 years and two Chinese Water Dragons. Having her own Dragons is expected as she is dragon crazy and anyone that walks in her house can tell. Her son Nicholas visits when he is on leave from the Marines.  Her daughter Susannah visits to check on the ‘old’ people.
Beverly has traveled around the world thanks to five years in the US Navy and has worked for the government in one capacity or another for the past 30 years. Beverly and her brothers have travelled most of the continental United States as children due to the station wagon from Hell.  Still active with veterans, she is adjutant for her local AMVETS.
Beverly has been reading romances since her Aunt introduced her to the gothic romance in the fourth grade and is still reading every chance she gets.


Blog: http://SSLYblog.wordpress.com
Posted by Wendi Zwaduk and Megan Slayer at 12:30 AM 1 thoughts from the masses