This post is part of a virtual book tour organized by Goddess Fish Promotions. Jennifer will be awarding a $25 Amazon/BN GC to a randomly drawn winner via rafflecopter during the tour. Click on the tour banner to see the other stops on the tour. 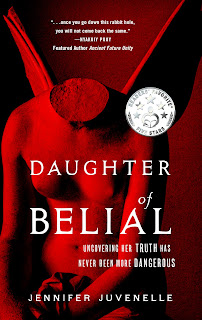 Some Family Trees Should Be Burned. . .

Sophie Greer knows none of this. All she knows is that her now ex-boyfriend cheated on her, she’s alone working in Paris, and her mysterious billionaire boss, Edward Hughes, is way too interested in her life.

But when Sophie is kidnapped in Moscow while on a business trip, she’s plunged into the dark underbelly of the global elite and a sinister secret society with deep ties to her family; ties that lead to revelations darker than anything Sophie could have imagined.

Betrayed by the man who raised her, and targeted by the illustrious Hughes family, only one thing is certain—family history can be deadly. If Sophie is to survive, she must decide who to trust and what to believe, or risk being crushed beneath the weight of the all-powerful secret Order of Belial.

The front door slams behind me with a clamorous thud. I jump, frightened. Marcella Belleville’s ominous laughter sails through the air while the cloaked beings descend the steps to encircle me. Turning to and fro, I try to slip through an opening in their ranks, but they close in so that not even a hairpin could find a fissure for escape. A low chanting starts up, like a rumble from some vile private inferno.

The primal beating of the drums grows louder, drowning out Marcella’s maniacal laughter. Blood rushes to my face. I hear a whirring in my ears.

All I see is darkness. My heartbeat keeps time with the pulsing of the drums.

Suddenly I feel another presence. Ephemeral. Sinister. It also laughs. Its guttural wails blend with Marcella’s tinny falsetto as it, too, encircles and envelops me. No one is touching me. I know that. And yet…

It feels like hundreds of hands are caressing my body. Sliding up and down the sides of my torso. Untucking my shirt. Unfastening my trousers. Cupping my breasts. Pulling my hair. Wrapping icy, tentacled fingers around my throat…

It feels awful—delectable—disgusting—delicious, all at once. I hate it. The chanting grows louder.

But it’s too late. Wispy black smoke fills my nostrils. My mouth freezes into a silent scream as the smoke fills every orifice in my head—eyes, nose, ears, mouth. The sound of babies crying mixed with horrific images of children laughing and playing in blood assault my senses. I know it can’t be real, must be a trick of some sort, an illusion, but I’m powerless to stop it. 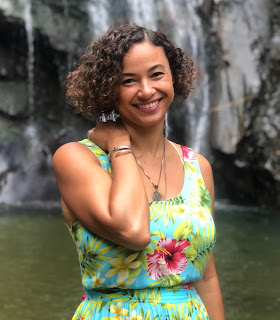 JENNIFER JUVENELLE is a Native American/French author born in Hollywood, raised in Detroit, and fashioned in France. Formerly an actress and model, Jennifer now splits her time between crafting psychological thrillers and the magic of motherhood. A survivor of childhood sexual abuse, Jennifer made healing from trauma a priority when her life became untenable. Daughter of Belial is the unexpected product of her journey from trauma to triumph. An eager explorer, she currently lives in a remote Mexican seaside-jungle village with her debonair Aussie author husband and their young son.


Posted by Wendi Zwaduk and Megan Slayer at 12:30 AM 2 thoughts from the masses

Book Blast ~ Cause for Elimination by Maria A White

This post is part of a virtual book tour organized by Goddess Fish Promotions. Marla A. White will be awarding a $25 Amazon/BN GC to a randomly drawn winner via rafflecopter during the tour. Click on the tour banner to see the other stops on the tour. 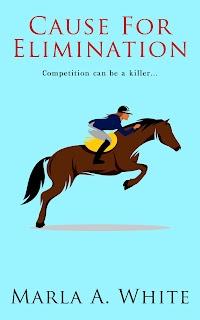 Reclaiming her life after a devastating riding accident, equestrian Emily Conners’ world shatters again when she discovers her friend and boss laying in a stall with a smashed skull. Now jobless and with a handsome cop underfoot investigating the case, she's torn between wanting the killer found and keeping her own secrets safe.

Detective Justin Butler always gets his killer, but this victim has a stampede of enemies and few leads to go on. Stonewalled by the tight-knit equestrian world, he looks to Emily for help, but she’s strangely reluctant. Is she hiding something, or is she afraid of their growing attraction?

As the search for the murderer heats up, their hearts become entangled and their lives at risk, forcing Emily and Justin to work together to find the killer before they strike again.

Sitting around the rickety picnic table and talking over old times, she almost forgot for a moment why the detective—Justin, she reminded herself—was there. He sat there, loose limbed and relaxed, interested in their conversation while most non-riders soon got glassy-eyed with boredom. But he wasn’t just chatting, was he? She had to remind herself he was listening for information to help him catch a killer.

“What about you ladies?” he ventured. “Did any of you ever have any problems with Ms. Yates?”

After another fit of laughter, Erin howled, “Like we’d ever ride with Pam. Despite what everyone around here may think, we’re not crazy. Well, not that crazy at least.”

“Hunters are more our speed,” Samantha chimed in. Emily took in her very un-hunter-like, fringed pink half-chaps and raised her eyebrow. “Okay, we don’t fit in with that crowd either,” Samantha admitted. “Which is why we’re here with Ben.”

“Since Pamela had Ben blacklisted, he’s stuck with us ladies who hack.” The three shared another round of titters.

They may not have realized they’d supplied Ben with a motive to kill Pamela, but Emily did. “Hang on, rumors have blown that way out of proportion. Pamela wasn’t thrilled after Ben dissolved their partnership and took his clients to Middle Ranch, but—”

“Hah! ‘Wasn’t thrilled’ is putting it mildly,” Sandy interrupted. “First chance she got, she had him brought up on abuse charges.”

Samantha added her two cents. “They banned Ben from showing for three years, so naturally, his clients who were serious left him and found another trainer.”

“Funny, no one told me this before now.” Justin’s voice lost its light tone, and the heat of his glare rolled over Emily’s skin. 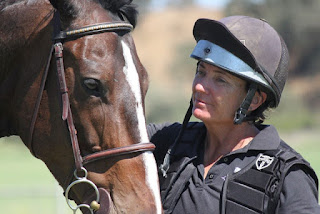 Marla White is a story analysis instructor at UCLA and writing coach who lives in Los Angeles. She graduated from the University of Kentucky (go Wildcats!), where she took her first horseback riding lesson. After dabbling in hunters, barrel racing, and weekly trail rides, she fell hopelessly in love with the sport of eventing. She conquered Novice level before taking a break to pursue novel writing but hopes to return to the saddle someday soon. Her first novel, “The Starlight Mint Surprise Murder,” was published in 2021 followed by the first two books in her Keeper Chronicles series. When she’s not writing, she’s out in the garden, hiking, or putting together impossibly difficult puzzles.

Posted by Wendi Zwaduk and Megan Slayer at 12:30 AM 3 thoughts from the masses

It's time for a cover reveal for my friend, Rosanna Leo!! 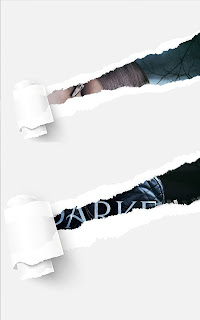 And here is the official cover... 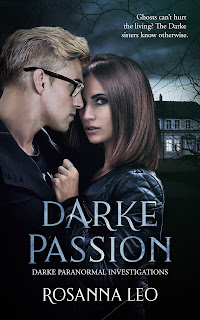 The cover artist is Kelly Martin of KAM Design

And it could be one of them.

Available in 2023!!
Posted by Wendi Zwaduk and Megan Slayer at 12:30 AM 0 thoughts from the masses

Book Blast ~ In the Mood by MW Arnold

This post is part of a virtual book tour organized by Goddess Fish Promotions. M W Arnold will be awarding a $10 Amazon or B/N GC to a randomly drawn winner via rafflecopter during the tour. Click on the tour banner to see the other stops on the tour. 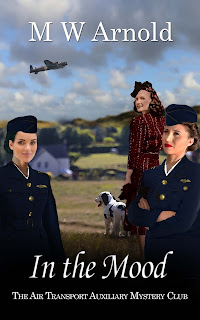 During a hectic couple of weeks in February 1944, the girls of the Air Transport Auxiliary Mystery Club must face devastating personal loss amongst their number. A member of an illegal faction blackmails Betty, whilst a mystery at Mary's ancestral home threatens to cause more trouble than anyone thought possible. In the midst of what should be the happiest of times, the portents seem to be catching up and little is what it seems to be. Can the girls find the strength to battle forces both internal and external, yet still maintain their dignity and friendship?

After lowering the shoebox into the newly dug hole behind Riverview Cottage, Walter stood up straight again.

Ruth nodded, bowed her head, and clasped her hands before her. “Dear Lord, in whom we trust and worship, accept this, a symbolic foot, to your mercy. Look over my son in his time of need, all his friends, and the subjects of His Majesty, King George the Sixth. Amen.”

Bending down, Ruth shoveled some dirt over the box before passing the tool back to Walter, who did the same. Turning around, Ruth called for Bobby and placed him on the leash once he came to a halt at her ankles. Walter now filled in the rest of the hole and patted it down with the back of the trowel.

Dusting some dirt off his knees, Walter got to his feet. “Ready for work?”

Ruth cast one glance down at the small mound of earth. “I suppose.”

“There’s the enthusiasm I love!” he joked, offering Ruth his arm.

Taking it, Ruth led him toward the side entrance with Bobby pulling on his leash, eager for an early morning walk. Squeezing Walter’s hand, Ruth told him, “At least I can put in my next letter to my son that we’ve held a funeral for his foot. I feel a little guilty, as it’s a while now since I told him I’d do one.” 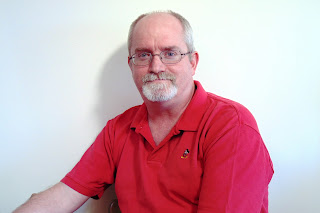 M W Arnold lives near Northampton, UK and is known to his family and friends as, Mick. He was in the Royal Air Force for 16 years, visiting many different countries and very much enjoying himself. If he ever meets the Queen, he will have to thank her. He began writing as these characters needed their own voices. For a few years now, he's been a member of the Romantic Novelists Association, a wonderful group of writers who've welcomed this bloke into their fold with open arms.

a Rafflecopter giveaway
Posted by Wendi Zwaduk and Megan Slayer at 12:30 AM 1 thoughts from the masses