What the? Wednesday...Ten Things You Didn't Know About...Please Remember Me 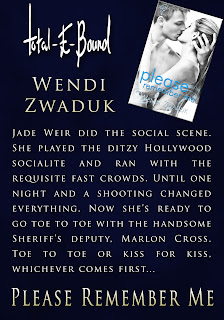 Since release day was Monday and I'm still pretty jazzed (who wouldn't be?), I thought since today's gonna be super busy, why not make today 10 Things About PRM?

10. I wrote the story in outline form over two years ago. Scratched it out in a notebook.

9. I wrote the outline while watching a dirt race in the rain. Yup. It rained. We sat in my truckbed, edge of the track, nice plush lawn chairs of our own, ate fried chicken and I wrote during the yellow flags.

8. Marlon is based on Ewan McGregor in the third Star Wars Movie (the one that came out last). Yeah, I'm a sucker for almost middle aged Obi Wan.

7. Jade is curvy in PRM, but she's not Rubenesque. She was Paris Hilton thin in Right. Now she's what her doctor calls a healthy weight. But she's now giggling and saying I need to write a Rubenesque character.

6. Crawford, Ohio is based on where I grew up. The downtown where Jade walks is actually taken from the downtown of my kid-hood.

5. Judi is a real person. I knew her very well, miss her constant laughter and her grousing at me for drinking soda.

4. I've always wanted to name a pet Mrs. Nesbit. Dunno why, other than it was in an old episode of the Monkees. No, I wasn't old enough to have seen it live--that's about 12 years before my time. Reruns! I liked the name. In PRM, I got to use it.

3. Tantrum is the name of a cat that belonged to a friend of mine. I thought, upon hearing the name, that is a FABULOUS name for a cat. They throw tantrums all the time, just in a very sophisticated, here's my rectum sort of way. Had to use the name.

2. Marlon drives a Jeep. Little did I know when writing it, that I'd soon OWN a Jeep.

1. I have no idea which story is going to come after PRM. I've had requests for Maggie and Ray's story, but there's the issues with Les and Levi, and new characters that want to talk...so the follow up is anyone's guess right now. :-)

Hope you enjoyed my little jaunt down the backstage of PRM. Heck, grab a copy and let me know what you think.
Posted by Wendi Zwaduk and Megan Slayer at 2:00 PM