Since the All Star Race is this weekend, and I'm a NASCAR kinda girl, I thought I'd do a post about racing and the things I love about it. Hope you enjoy the post as much as I did writing it.

13. The tracks. Yeah. Ranging from smooth and flat, to like my driving conditions, to banking I can't even walk up...the tracks are the best. 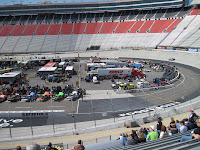 12. The feuds. Funny how one argument can totally wreck a race or whip up a whole group of people. Yup, I've witnessed fans tossing beer cans on a track because the wrong guy won.

11. The trucks. Have you ever seen the trucks that carry the cars to and from the tracks? Those things are monsters of efficiency. Cars on the top shelf, tools and parts on the bottom and a little area for all the computers. Easily a million dollars on wheels. 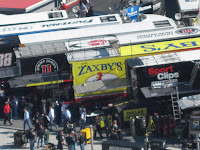 10. The swag. There is some crazy race swag out there. From navel piercings, to light up bobble headband things, to the standard T-shirts and die cast cars. You can literally go broke in the vendor section. 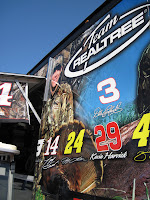 9. Jeff Burton - gotta give props to the 31 team. They're still going and gaining momentum. Plus, they have Caterpillar on the car. That's awesome.

8. The fans. There's some rabid folks. Want to start an arguement? Scream your alliance with a particular team, manufacturer brand, or driver. Instantly you'll either have a ton of pals or you'll have something lobbed at you.

7. Hand signals. You're wondering what I mean? Go to a race or just watch the crowd. There is always someone, forty rows up, completely out of the view of the driver, completely and wholely convinced the driver can **see** them as they give hand signals as to where to go on the track, who to pass, or who to wreck. I'm telling you, people watching is a blast at a race.

6. The pomp and circumstance. The drivers having their own intro music, the fireworks and ticker tape as they walk out in front of the crowd. You can be sitting in the crowd, have absolutely nothing to do with the race other than to be a spectator, but man, it's like the whole crazy thing engulfs you. You have to cheer and smile!!

5. Kevin Harvick - the guy can race you hard, wreck you, smile, and then whomp on you because you raced him hard, too. At least he gives as good as he gets. Plus, he's an owner as well as a driver. Guys with brains and brawn are very intriguing.

4. The cars and trucks. I said the trucks up above, but this time I mean the race vehicles themselves. In the Nationwide and Sprint Cup series, they race cars - Impalas, Fusions(Mustangs), Camrys, Challengers. In the Camping World series, it's all about the trucks - F-150, Silverado, Ram, Tundra. Those things are all a blast to watch screaming down a curve at oh, 190 mph. 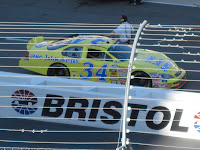 3. Richard Childress Racing - plain and simple, they rock. Might not be the biggest out there, but they've overcome the lowest lows and soared with the highest highs. Richard's a former driver and he knows what's best for his teams. He's not about to short change just because it looks cool.

2. Clint Bowyer - yuppers, he's my guy. My driver. Gotta cheer for BB&T, Cheerios, and Chevy. He might not be the most outspoken, but he's not easily pushed around. Oh, and he's got a team to back him up and if he doesn't kick your butt, they just might. Plus the 33 just plain looks awesome on the track.

Number one rather goes without saying...

1. Gentlemen (and sometimes ladies), start your engines!!!!
Posted by Wendi Zwaduk and Megan Slayer at 6:00 AM