Ten Things You Didn't Know About...Must Be Doing Something Right

Gotta roll with a theme, eh? This week, it's Must Be Doing Something Right. Ok, so this was my third story and it was a favorite because I got to ask legal beagle questions.

10. Courteney was originally a librarian with Abby from Learning How to Bend. 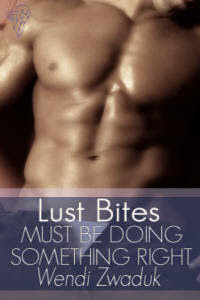 9. Nate was originally a trial lawyer, but I don't know too many trial lawyers who deliver pizza...

8. I wrote the story in about a month.

7. I wanted to write a scene with voyeurism. Nate and Courteney shouted, 'we'll do it!'

6. The story went by 'The Lawyer Story' for the longest time because I wasn't sure what the title would be.

5. Arran still doesn't know how many times Nate and Courteney initiated his desk.

3. Courteney started writing erotica to pass the time and to get the characters out of her head and onto the page. Sound familiar? Oh, and Nate is completely for the research portion.

2. Yes, I had that pesky Billy Currington song going through my head a lot while writing this book.


1. The book started out with Nate and another character, but he kept informing me he'd only make love with Courteney. I couldn't tell the guy no, yanno?

If she can open her heart, she’ll find he’s her naughtiest dream come true. Being mischievous with him is exactly what she needs.

Nate Waterford knows exactly who he wants in his bed and his heart, but he’s on guard. When women find out his profession, they see dollar signs. He’s been hurt by gold diggers and he’s not about to fall in love—until he sees Courteney. She’s his fantasy come to life and once he gets her in his arms, he’ll be damned before he considers letting her go. Unless she tells him to go to hell first...

Despite her success as a fledgling romance author, Courteney Bennett’s had her share of bad relationships. She’s attracted to her best guy friend, Nate, and she’s not ready to throw a friendship away for one night of passion—even if his idea of desire puts the hottest scenes in her erotica stories to shame. Is her heart a fair price to pay for an evening to remember or will it be the biggest mistake of her life?