The fantastic Miss Desiree Holt stops by tomorrow with her tour for Downstroke. Want to know a little bit more about Miss Desiree or the book? Here's the blurb. Come back tomorrow for the tour!!!

It’s been twenty years since Charley Roper and Dallas Creed parted with great
bitterness. In that time she’s made a career for herself with the FBI and private security and he’s been a country rock music icon…tumbled to the bottom and risen again. Now someone’s trying to kill him and Morgan Creed wants Charley to protect his brother and find out who’s after him. When they meet again after all this time it’s obvious the chemistry is still there, stronger than ever. They’re older but are they wiser? Caught up in the bitter wash of memories and the tension of a killer in stalking mode, Charley and Dallas begin a roller coaster ride that is emotional erotic and suspenseful. Is their love strong enough after twenty years to pull them back together? 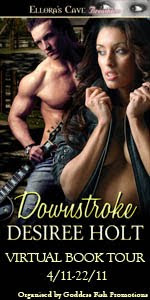 Come on back tomorrow!! We'll have a blast.
Posted by Wendi Zwaduk and Megan Slayer at 4:00 AM