Not one of mine. Sorry. Well, yeah, I guess it is one of mine. Have you ever read a book you just couldn't put down? Sure, there were times when you wanted to throttle both characters, but you HAD to know what would happen next?

I did. When I read Crunch Time by Andrew Grey.

This is one of those books.

Now I have got to tell you, I love the work of Mr. Grey. I've read the other books in this series about the gym. It's fantastic. Really. The characters aren't perfect and that's what was really exciting. You could see yourself in their shoes, 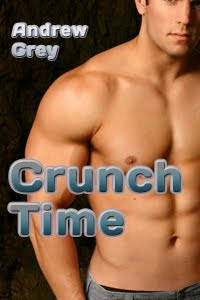 er...cleats. Darren isn't perfect by any means, but he's trying to be the football hero. George just wants his fourth graders to succeed. I loved the pairing of these two unlikely men. I can honestly say, I wasn't sure they'd even get past their differences to get together. Polar opposites. But the way Mr. Grey writes the coupling, it's sweet and spicy at the same time. There are tons of twists and turns that I didn't see coming. Each little change added layer upon layer to the story. By the time I closed the book, I'd laughed, cried, and wanted more. You should read it.

Here's the blurb:
When George Higgins agrees to help a soon-to-be-former professional football player rehearse for a guest appearance on a talk show, he doesn’t expect anything to come of it. To his surprise, Darren White shows up on time and actually makes an effort to learn from George. But Darren has definite problems; he can barely read and sounds awful when he speaks. Luckily, George is a teacher and Darren’s motivated. It’s crunch time: the first rehearsal for Talking Sports is looming, and Darren and George will have to work together if they want Darren’s guest appearance—and their budding relationship—to turn into a full-time gig.