Not Your Momma's Classics 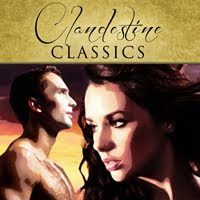 So by now you've probably heard the hub-bub about the new Clandestine Classics from Total-E-Bound. You haven't? Well, let me tell you about them.

The Clandestine Classics are interpretations of the original classics. Total-E-Bound figured why not add the sex created by the sexual tension in the classic stories?

In my case, it's The Phantom of the Opera written by Gaston Leroux, first and foremost, and sex added by me. Yep. I let the Raoul and Christine get hinky. The Phantom gets his chance and even ole Carlotta has a boy toy (what diva doesn't?)

Now if you're like a lot of people, you're probably wondering why. Why did we 'desecrate' the classics? In all actuality, we didn't. Yes, okay, so Raoul and Christine 'get down and make love'. Tell me you didn't see it coming? Tell me a teeny part of you didn't wish they did and you could see it? Tell me you didn't want to see Gerard Butler in his Phantom get-up get up and down with Emmy Rossum? I know I did.

The truth is the story is the same. Yes. I didn't take anything out. Nope. I took seriously great pains to make sure it all stayed the same. I wrote as well as I could in the author's voice and worked like a dog to make sure the sex scenes didn't appear dumped in.

My addition to the group won't be out for another couple months, but don't hesitate to pick up the ones coming out July 30th.

Another thing that's been kicked around is that the authors are changing the stories. I start first by mentioning, just because Disney made a movie about it, doesn't mean that's how the actual story went. Second, Claire Danes played Juliet, so does that mean the ONLY way we can see Juliet is as that actress? I think not. That's what the imagination is for. IMAGINING!!! And yay for that!! In my imagination Sleeping Beauty isn't blonde and she's not got a perfect figure. Ha! What about you? What do you think?

So click the banner or Clandestine Classics to get a taste for what we've done. Might not be your cuppa tea, but then again, it might open a whole new world for you. You never know.
Posted by Wendi Zwaduk and Megan Slayer at 7:38 PM

Oh dear. Blogger decided to trick me into thinking I hadn't posted. Apologies!

Right, we didn't change the stories. Kept them exactly what the author wrote... with a few kinky additions. Thanks for stopping by Sarah!

It's okay if I read this and think about Gerard Butler in his pre-alcoholic bloater days getting jiggy all naked 'n' sweaty, right?

Scarlett oh heck yeah, who do you think I had in mind while WRITING it? Love me some Gerard. Yum!