Like the new banner? I do. It's white hot. Now it's time for Monday Moans. I love this time of the week. Happy shivers. Speaking of happy shivers, I'm featuring my novel My Immortal. The book has garnered some mixed emotions from readers. My vampires might not be run of the mill, but to me, that's what makes them fun. See what you think! 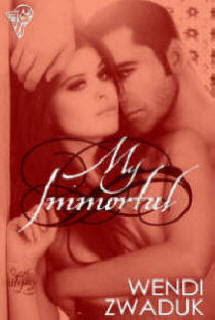 What’s a girl to do when she finds out the man of her dreams is a 340-year-old vampire? Run like hell or offer her heart.

Being a vampire hasn’t been easy for Storm Richardson. He’s not programmed to kill or harm, unless he needs to feed. When he meets Stephanie 'Stevie' Persing, he knows he’s found his mate. But if he crosses the line between work and play, he risks losing the only person who matters—her.

Stevie’s been in love with Storm since the moment she laid eyes on him. He’s brooding, intense, and her one weakness. But is her heart too steep a price to pay for his love, especially when she discovers his deepest secrets?

Reader Advisory: This book contains minimal scenes of rape in a flashback as well as smokin’ hot sex in a hot tub, a pickup truck, and the shower.

And now for that moan!

“Ah Stevie, this music makes me want to rush home to fuck you.”

A moment of shock flickered in her eyes as she froze mid-kiss.

He grasped her hips and tugged her closer. “Do you feel this, Stevie?” His erection pulsed against her curvaceous butt. “You do this to me, not a silly bet. No one else.”

Her lips parted and he captured them in a deep kiss. Heat rushed through his system. He needed a bed, now. Her nails scraped his scalp, but he didn’t care. He wanted her marks on his back, his arms, anywhere she damn well pleased.

A bump from one of the couples in the crowd broke his reverie. He glanced up to see Bruce and Cherylyn knotted up in their own sensual embrace. He snorted. Shitty timing. “Spin, Stevie. Photo time.”

A fresh burst of desire flushed his body. His cock throbbed to the point of pain. He nodded when he finished his handiwork and tugged her close once more. “Let’s get one of us together.” She snuggled against him and pouted for the camera. At the last minute, she turned and planted a wet kiss on the corner of his mouth.

“You want to play dirty?” Storm met her surprised grin.

Stevie crooked a brow. Her eyes flickered with the pulsing light display from the ceiling and a bit of mischief. “Maybe I do.”

He shoved the electric device into his back pocket and captured her lips. They couldn’t get home fast enough.

What a sweet torment.