Monday Moans ~ Right Where I Need to Be

Moans are always so much fun. This one is sort of from the vault. It's been out a while, but I love these characters, so I had to share.

Right Where I Need to Be 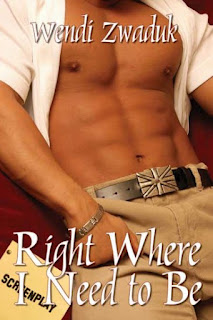 Cass Jenson needs an actor for her made for TV movie. The previous actor dropped out, leaving her stranded. Her savior shows up looking sinfully sexy and totally right for the part, but what part is she auditioning him for - her movie or her bed?

And now for that moan!! “I’ll get your water, but know this Logan Malone: don’t hurt her or I will hurt you. That’s a promise and a threat.” With that, Les stepped off the porch and disappeared around the corner of the garage.

Cass propped her chin on her knuckles. “Care to sit? You did work hard.”

Logan eased down next to her on the concrete step. He bumped her shoulder with his own. “I know where I’d like you to sit,” he mumbled.

Cass threw her head back and laughed. “You know how long it’s been since I heard that line?”

Logan shared her humor. “You can’t blame me for trying.”

Her laughter subsided as she watched him. “Thank you.”

He felt a camaraderie building and bumped her shoulder again. “That was a dirty trick, you know.”

Cass bit the corner of her mouth. “I know.”

Those two words resonated through his soul. She played his games with ease and intended to win. She brushed her hair away from her face.

“So where’s the water? I’m parched.” He grabbed his chest over-dramatically and slumped against her. “And fading fast.”

Cass playfully punched his thigh. “You are not, drama king,” she shot back. “We don’t have valets here in Crawford so you’re temporarily out of luck.”

Logan laughed until his chest hurt. “I need to learn how to get what I want on my own. I think this was lesson number one.”

She patted his knee, but her hand lingered a bit too long. “Good call.” She glanced at him and then at the ground before standing up. He reached out to touch the perfect globes of her ass, but recoiled. Don’t scare her.

She paused without turning around. “I’m putting the tractor away. Do you need something?”

Logan opened his mouth. You naked and in my bed teetered on the tip of his tongue. “A shower?” Was that all he could muster? Wow. He left the lion’s share of his smoothness on the plane.

Cass hopped aboard the mower. “You do ask for a lot, but I owe you.” She started the engine. “Les will show you where the guest bathroom is.”

Before he could answer, she drove off. Yes. A shower gave him time in her house. Now…to breach her defenses and melt the ice surrounding her heart.