It's time for another new feature. I get to go lots of fun places for my writing and I thought I'd share some of them with you. First one is the Mansfield Reformatory. Spooky! Why? I don't know that it's haunted (via personal experience), but it's a creepy looking place. Ever saw The Shawshank Redemption? A lot of it was filmed there. 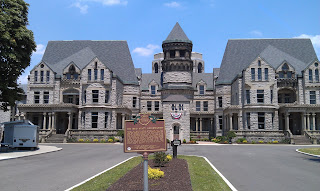 Looks kinda scary, doesn't it? It's more than a century old and has six floors (backs facing) of cells in two cell blocks. The cells are small and housed two inmates each. Talk about being right on top of each other!

My thoughts? The place is huge. I mean HUGE. It's crumbling, but it should be beings it's over 100 years old and was in disrepair. There are many reminders from the filming of Shawshank there, plus kiosks that tell you history of the different parts of the building. My mind wandered many times as to what the rooms looked like in the glory days and how I could put my ghost explorers in there in the present day. The statuary from the chapel were gorgeous - biblical characters in the style of the roaring twenties. But then once I left the chapel, the stairs led to the fourth floor of cell blocks. I wasn't expecting the steps to be OPEN. You know, those kind that have nothing under them except the metal of the steps themselves? Yeah, those. SCARY. I'm not good with heights, so it was worse. But I got to see the cells and how cramped they were. Solitary is partially underground and creepy. There's a sign that warns visitors not to close the cell doors as they don't have the keys and you could be in there a while. Grin. Below is my favorite photo: 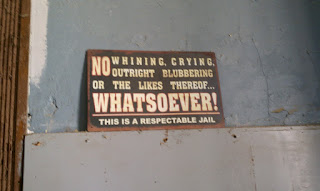 It was fun and required a lot of walking, but very much worth it. Want to know more? Click here!
Posted by Wendi Zwaduk and Megan Slayer at 12:00 AM