Thought I'd feature my novella Somewhere I Belong this week for the moan. I love this story and hope you will too! It's from Liquid Silver Books. Why not snag a copy for yourself? 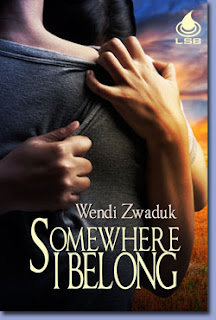 He never knew what he was missing until he came home to find his place to belong—with her.

Sullavan Tanner walked away from Jarvis, Ohio, afraid to give his heart to the woman he loved. He lived the rock and roll lifestyle, but never quite made it to the big time. Fifteen years later, he’s back and ready to claim what’s his—if she’ll accept his help.

Marley Lockwood’s done asking for help. The family farm is more than she can handle, but if she can survive a cancer scare, the loss of her parents, the abandonment by her first love, and a messy divorce, she can handle anything.

Until Sully shows up.

Although she’s not interested in rekindling the love affair, she’s not above accepting Sully’s hands on the farm. What’s the worst that could happen? They get the farm out of the red and into the black? That’s her plan. They actually fall in love? The past says it won’t work, so she’s not hedging her bets.

Too bad Sully’s not giving up this time.

And now for that moan!!

A warm hand touched her other shoulder, jerking her from her thoughts. “Do you mind if I sit with you?” The gravelly voice rolled down her back. Heat enveloped her and not from the August night. The twinge of fear subsided, replaced by the strength of his presence.

Sully shuffled his feet and crinkled his brows. His cocoa-colored eyes glittered in the firelight. He’d shaved the midday scruff from his cheeks but left a sprinkling of hair on his chin and upper lip. Instead of wearing the standard bandana, his hair stood in messy spikes, giving him a tousled, straight-out-of-bed look. His cologne wrapped around her like a woodsy blanket. Her mouth watered. How could one man look so darned sexy without effort?

“Chores are done, you’re free, I’m free. I wanted a dance for old times’ sake.” The silver ring on the middle finger of Sully’s right hand caught the light as he gestured to her. “Will you dance with me, Marley? I don’t have cooties, man germs, or any other gross diseases.”

Man germs...good grief. She needed an answer to put him back in his place.

“Dancing isn’t my thing.” Why did Sully make her so nervous? Because Sully made her inner thighs heat and her heart thunder. Every time she heard him sing she swooned. Hell, when they worked side by side on the wagons, she resisted the urge to smother him with kisses. She pressed her lips together. The idea of his sexy naked body melding with hers had haunted her dreams since she hit puberty. Of all the men she knew, Sully remained elusive and out of reach. And yet, he’d come back when she needed him the most...like a white knight. God, she had to get the childish, fanciful thoughts from her head and regain her footing in the real world.

Sighing, he eased down next to her. “I don’t buy that for a moment, but I’m not gonna push.” He bumped her shoulder with his, sending a frisson of lust snaking through her body. “I missed our late-night conversations.” A chuckle erupted from his throat. “You know, I never found someone to understand me like you do.”

She balled her fists to keep from touching him and stared at the crisp yellow flames. Sully smelled like sin and pine. “Conversationalist is my middle name.”

Sully cupped her chin, redirecting her gaze. “And all this time I thought it was Elaine.”

Despite wanting to stay, Marley stood. “I never could fool you.”

She shook her head. “I have a question.”

“You left after we had sex. Like right after. Was it that bad or was it just a notch for your belt?”

“Thanks for your answer.” She brushed imaginary debris from her lap. “You and I work together. There will be no dancing, no kissing, and no love. Got me?”

“Who said kissing?” He stood and grabbed her hand. Sully tugged her away from the fire and the rumble of conversation to the privacy of the back porch. “There’s a lot of stuff you don’t know about, and I don’t know how to tell you, but I absolutely want to kiss you.”