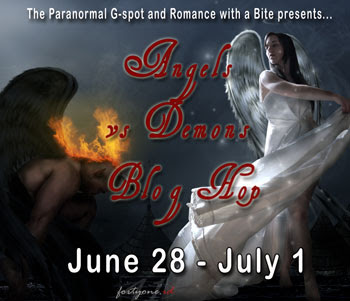 The hop is about angels. I haven't written about angels - well, not under this name, but I have a sexy spirit who is going to make an appearance in a couple months. Grin. Anyone remember Careless Whisper? Well, Felicity is coming back! Grin. Actually, evil grin! I'll share a snippet from Careless Whisper in a bit, but here's some fun angels Felicity asked me to share! 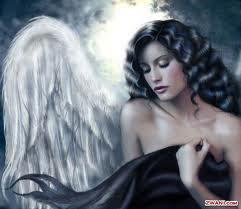 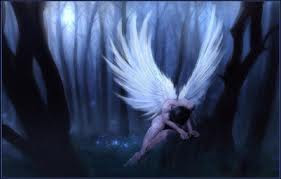 And now for a little bit about Careless Whisper: 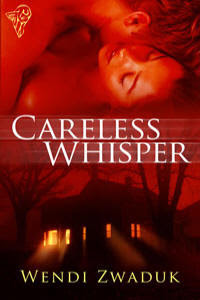 Now for a snippet!

He rapped on the window to gain her attention. The rain dotting his back did little to cool the fever spiriting through his body.

“Ryan.” Samara screeched and fumbled to turn off the radio. “That’s the second time. You could warn me if this is going to happen on a regular basis.”

“I didn’t want to interrupt the concert.” Ryan slid into the seat and placed the paper bag on the floor between his feet. Regular basis? He loved the sound of that.

“Uh-huh.” She shifted the car into reverse and backed out of the parking spot. “Back to your house?”

“You read my mind.” Once there he’d show her how much he wanted her and all the places they could explore—body, mind, soul.

“That’s not even close to what’s whirling in your mind.” She snickered. “I said nothing about fucking senseless on the couch, dining room table, stairs, and finally the bed.”

“I am who I am and I don’t lie.” He shifted in his seat to cover the growing erection behind his zipper. Maybe she knew more about sharing her thoughts than she let on. “Although your ideas sound like a better plan.”

Now about those prizes! This is for the WHOLE HOP: ONE winner gets a Kindle Touch & ONE winner gets a $60 Amazon or Barnes&Noble Gift Card. You HAVE to leave your name and email so we can get in touch with you.

And now for my part of the hop...I'm going to make you do some work! So what do you have to do? Leave a comment. Which book is your fave angel/demon story so far? Tell me why. Then leave your name and email so I can contact you if you win and you're in the hat for a copy of Careless Whisper! Want more chances? Follow me on Facebook, follow my blog, and to follow me on Twitter, and sign up for my newsletter in the box on the left.

The contest ends July 1st at midnight, so act now. I'll announce the winner right here on the blog on July 2nd as well as I'll email the winner!


I'll bet, now that you've read the post and commented, you want to follow the rest of the tour? I thought you might. Grin. Here's the link for the rest of the hop:
Posted by Wendi Zwaduk and Megan Slayer at 12:00 AM

I really like Nalini Singh's Guild Hunter series. Thanks for participating.

I'm fav demon is Wraith from the Demonica series...double score for being a sex demon and a vamp...love me some fangs!
Fb Andie Wardlow
Gfc Andrea Wardlow
Newsletter andieleah78@gmail.com

I've not read them, yet... but I really love the covers!

Got you on FB and twitter (jkimmelf) and got the blog!

sounds like an interesting book! thanks so much for participating in the hop!

The Demonica series by Larissa Ione. It's packed full of action and hot guys! LOL

The Demonica series. Hot guys, need I say more.
Thanks for the giveaway. I follow you all ossible ways.

I like Mel, from Love's Prophecy. But I'm an angel kind of gal! Great pics on your post!
sherifredricks at charter dot net

bacchus76 at myself dot com

I love the Lords of the Underworld by Gena Showalter and Larissa Ione's demons.

I love the demons from the Demonica series by Larissa Ione! Wraith is my favorite :)
laceyblossom1(at)gmail(dot)com

why choose one when you can have Angels & Demons.
roseannh95@gmail(dot)com

I'd have to say it's a toss up between Joey W. Hill's Daughters of Arianne series or Cynthia Edens, The Fallen series. Both authors are great writers.
luvfuzzzeeefaces at yahoo dot com

Love the covers and I follow you as well!
Yvette
yratpatrol@aol.com

I love the Georgina Kincaid series by Richelle Mead and the Guardians of Ascension series by Caris Roane.

My favorite angel and demon story so far is Wicked Nights by Gena Showalter. I loved the main characters and the story was fabulous! Pick it up if you haven't read it.
molly(dot)frenzel(at)gmail(dot)com

I love the demons from IAD by Kresley Cole. Yummy.
Fb is Shanna Roberson
Twitter is pyxirose.

Favorite angel is Keenan from Angel of Darkness by Cynthia Eden. He gives it up for the woman he loves.

I'm loving The Lost Angels series by Heather Killough-Walden and my very fav. Demon is Wraith from Larissa Ione's Demonica series, that boy is delicious :)

I love the Lords of the Underworld series by Gina Showalter.
As far as angels vs demons, who doesn't love a bad boy? Demons baby! mawmom@gmail.com

I am still fairly new to the angels and demons genre. I have several of Felicity Heaton's books and will be reading those.
Mel
bournmelissa at hotmail dot com
Twitter: @MelCamino5

My favorite angels are from Nalini Singh's Guild Hunter series. They aren't heavenly creatures, but instead rule the world of mortals & vampires. Bad boys that are incredibly sexy :-)

Wards Fallen Angels are about my favorite but Nalini Singh's are very close! I have to say that Careless Whispers look like a great read! I love ghost hunter shows and books. Thanks for the giveaway!
FB friend request sent - Susan White Follow blog.
suz2(at)cox(dot)net

I haven't read any, so I don't have a favorite But I choose angels. Thanks so much for participating in the hop! I follow you on Twitter (EmilyJoy0) emily joy drake at gmail dot com

So far the book that comes to mind is Angel Evolution by David Estes because of his different take on the two.

My favorite demons are are in the Demonica series. They are a bunch of sexy demons (there are also some great angels, shifters, etc)
manning_2004 at yahoo dot com

I love Anne Bishop's Black Jewels Trilogy -- I loved Daemon & Janelle, and the world-building and story-telling was absolutely fantastic!

I'm reading an interesting one right not. It has a different approach to the concept, the title is Beyond the Eyes by Rebekkah Ford, it is not blatantly calling the characters angels or demons and the angels may actually be a type of vampire LOL Have I confused you yet? The bottom line - its a great read :) Thank you for participating in this fun hop.
dz59001[at]gmail[dot]com
GFC and Facebook (Denise Zaky)

My favorite Demon book so far has been the Demonica series by Larissa Ione. The characters are very well developed, and the reader becomes emotionally invested in them.
I follow you via Facebook, GFC and subscribe to your newsletter
Lisa Hackney
yankssssrule08(at)yahoo(dot)com

I like them both, but I prefer demons, especially those with a bit of a soft side. I particularly like Al from Kim Harrison's Hallows series.

I like the Lords of the Underworld by Gena Showalter. This series has both angels and demons. In fact, there is a spinoff series about angels.
Follow the blog and twitter (beckerjo). And FB as well (JoAnna Halpin becker)

I really like the Nightwalker series by Jacquelyn Frank.
Thanks!
I follow you on Twitter @VettekLisa
sent friend request on FB Lisa Cox
signed up for newsletter
lisa(at)vetteklisa(dot)com

Thak you very much for the great giveaway! I really like the Demonica series by Larissa Ione!
GFC-latishajean
Twitter-latishajean
tishajean@ charter.net