This week I wanted to feature a couple of characters that put me through the emotional wringer. Yes. The Sunday Snog today comes from Someone Like You. Mindy and Arran are certainly two I'll never forget. 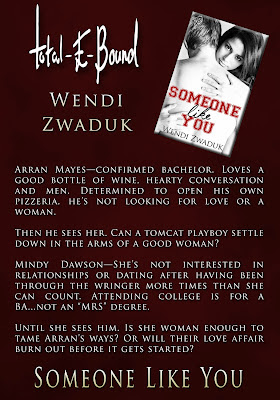 Available at Total-E-Bound and AllRomance Ebooks

“I never thought I’d find someone like you, someone who gets me. Makes me laugh. Someone who cares enough to pick me up when I’m down.”

This time Mindy did shove him—down onto the couch. Her hair dusted his face in a whispery caress. Her breasts strained against the fabric of her T-shirt, her taut nipples prominent. His throat ran dry. If he moved his hands, he’d feel those sweet nipples. Could almost taste them.

“Let me.” She straddled his hips and sat up straight. “If I’m going to ruin you for anyone else, I might as well go all out.” Mindy grasped the hem of her shirt and whipped the cotton over her head.

Arran gasped. The tips of his ears burned. No bra. She wore no bra. Wasn’t there some law somewhere stating women wore the contraptions?

Her smile twisted into a frown. “No?”

His blood thrummed in his ears. His cock stood at attention behind his zipper. “Come here.”

Arran tugged her back down into his arms and met her for a kiss. Her tongue danced against his mouth. He groaned and let her in. Mindy curled her tongue around his and sucked at his bottom lip. At the same time, she snaked her hand down between their bodies and massaged his dick. The sizzles low in his groin kicked up to a full five-alarm fire. He needed to get out of his clothes and fast. Hell, he needed her beneath him.

Without breaking the kiss, Arran sat up then stood and carried her to the bedroom. She might have protested the move—he wasn’t sure and he wasn’t going to find out. He placed Mindy on the bed and stared at her. Her flushed cheeks, tangled hair and wild eyes called to him without words.

“You shouldn’t carry me.” She brushed a lock of hair from her forehead. Her breasts heaved with every breath. She moved to cover herself. “Why are you staring?”

Why was he staring? Fear and embarrassment cascaded through him. “I’m at the edge of the great unknown.”