Lila Munro Stops by Tomorrow with her Assumed Master 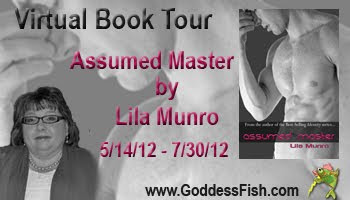 Tomorrow the fantastic Lila Munro will be stopping by with her latest book, Assumed Master. I'm really looking forward to her stop because these books are HOT!!! Plus, Lila will be giving away a $25 Amazon GC to one randomly drawn commenter during the tour. So yeah, commenting is a good thing. Grin. Follow the tour here! Want to know more about Assumed Master and Lila Munro? Here you go! 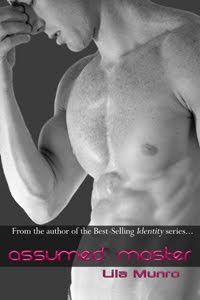 We may be born to the lifestyle,

Julie Stevens and Dante Larson always knew their tastes were a bit more eccentric than those of the average person, but acknowledgement of their chosen paths came at different times. While their lives have run parallel for the last twenty years, destiny always came knocking at the wrong time. Julie was a closeted edge player and before Dante could pull her free of her fears, Mason came along and dragged her kicking and screaming from her self-inflicted darkness, leaving Dante wanting. Although Dante’s been in love with Julie since the day he first laid eyes on her, he's happily married to Blake. But the tides are turning.

But Lady Fate dictates how it should be lived…

Still mourning the death of the only Master she’s ever known, Julie finds herself forced to live with the one man she’s been terrified of for years, Dante. While she has to admit something between them feels right, just as many things feel very, very wrong, starting with the fact he’s married to her gay best friend. Before she even has time to sort out her current predicament, another man catches Julie's attention. But after losing her mother, her sister, and her husband, can Julie come to grips with the fact that Keegan McKettrick jumps out of perfectly good helicopters for a living, rescue diving for the Coast Guard? And where exactly does that leave Dante, who knows for sure he needs a woman to complete his unconventional marriage? Quite frankly, he's tired of waiting.

And now for an excerpt!!!

“Shhhh…Love, it’s okay. I know. I understand. I suspect Mason will have quite a grip on you for quite a while in that respect, and I get it. I wouldn’t expect anything less.” He stood and pulled her to her feet, turned the water off, then moved to the vanity where he retrieved another towel and started squeezing water from her hair with it. “But you need that anchor. Do you understand that? You need to get settled into a routine. It’ll help bring you back center.” 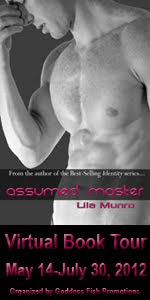 She didn’t know how this would ever work. Dante wasn’t the emotional Master that Mason had been. He was more a physical Dom and very stringent. That he was being so easy on her right now defied reason. That was almost more confusing than being here to begin with. If anything, she’d have expected Dante to turn her over his knee immediately for back talking and shutting him out.

“Let’s just use Sir for now,” Dante told her, tossing the wet towel onto the hamper. “Yes?”

“Yes,” she said, still clutching the towel around her middle and peering up at their shared reflection in the foggy mirror.

Lila Munro currently resides on the coast of North Carolina with her husband and their two four-legged kids. She’s a military wife with an empty nest and takes much of her inspiration for her heroes from the marines she’s lived around for the past fifteen years. Coining the term realmantica, she strives to produce quality romance in a realistic setting. Her genre of choice is contemporary romance that spans everything from the sensual to BDSM and ménage. When she’s not writing, she enjoys reading everything she can get her hands on, trips to the museum and aquarium, taking field research trips, and soaking up the sun on the nearby beaches. Her works include The Executive Officer’s Wife, Bound By Trust, Destiny’s Fire, Salvation, Three for Keeps, the Force Recon series, the Slower Lower series, and the Identity series. She’s a member in good standing of RWA and Passionate Ink. Currently she’s working on sequels to several series to be released throughout 2012. And has a brand new line scheduled for winter 2012-13.

Ms. Munro loves to hear from her readers and can be contacted via her website http://realmanticmoments.blogspot.com or through Facebook at http://www.facebook.com/Lila_Munro You can also contact her via email at lilasromance@gmail.com And now the links for Lila, because you know you want them!