I'm a little late getting the moan onto the blog, but gracious, yesterday was a busy day! Grin. So here it is. An oldie but a goodie! I'm still working on a follow-up for Rhett, don't worry. It's one of those seemingly endless things that's in the works. So enjoy You'll Think of Me. 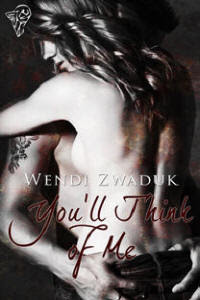 And now for that MOAN!

“Did I ever tell you how dead sexy you are?”

As he raised his thick brows and smirked, he rubbed her back with long, languid strokes. The creases on his forehead melted away, making him look like the Cade she remembered. Could Rhett’s comment be true? A tiny part of her hoped so. She shoved the thought aside to insulate her feelings.

His sexy rumble turned her insides out and spurred her on. She let go of his shirt and cupped his cheeks. “You are, and I want you—right now.” She pressed her open lips to his and moaned. Kissing Cade was almost better than sex. He knew how to tease and torment her with nothing more than his tongue. He tasted like sin and smelled divine, like an outdoorsman. A girl could get lost in that much testosterone, and Melanie never wanted to be found. How had she managed to stay friends-with-benefits with him for so long after the break up?

Groaning, he wound his fingers in her hair. Her scalp tingled as he spoke against her lips. “You do know how to get a man’s attention.”

She tugged him into the game room. Thoughts raced through her head. Her nipples brushed against his chest, sending streaks of electricity straight to her core.

As she snicked the door shut with her hip, she rubbed her hands over his body, both to keep her desires in check and to entice him. Hard muscle and heat seared her fingers. Her body hummed with excitement only Cade could elicit. Maybe if she stuck to touching, she could keep her heart safe within her defences.

His eyes darkened and a low whistle escaped his lips. He tugged her into his embrace as they toppled over the arm of the knobby brown couch. She ground her crotch against the steel in his pants and clutched his ass. “I want you.” God, it felt good to admit the truth. When he crushed his lips to her, he explored her mouth with his tongue. He slipped his right hand under her tank top and bra, pinching her taut nipple. Shimmers of lust and need raced through her veins. His normally hard expression softened and he smiled. “Baby, I want you too. I dreamt of you, but not like this.”

Did he want more? Emboldened, she fumbled to remove his cock from his pants. “I need you in me.”

“Wait.” He slid her silk panties to the side and stroked the slickness over her nether lips with his thick fingers, sending tremors through her body at warp speed. She whimpered. Had it been that long since she’d had sex? Yes, and he knew how to push all her buttons with the smallest touches.

As she curled her body into him, she nibbled his scratchy jaw and throat. “Cade!”

“So wet and so pretty, but I want to make this last. I want you so wet you’re begging for me.” He groaned and nipped her bottom lip between his teeth. He grasped her hip with his left hand. With the index finger of his right hand, he plundered her tight pussy in one long stroke.

Posted by Wendi Zwaduk and Megan Slayer at 8:44 AM

You're welcome Renee! Glad to make your day!