Sunday Snog ~ Right Where I Need to Be

This week for my Sunday Snog, I thought I'd shine a spotlight on my first novel, Right Where I Need to Be. Thanks to Victoria Blisse for having the Sunday Snogs. This is so much fun. Click here or on the banner for more snogs. Now on to that Snog of mine!

Right Where I Need to Be 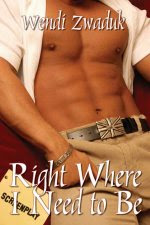 Cass Jensen needs an actor for her made for TV movie. The previous actor dropped out, leaving her stranded. Her savior shows up looking sinfully sexy and totally right for the part, but what part is she auditioning him for - her movie or her bed?

It's snoggin' time! “There’s a lot you don’t know about me,” he replied and sat on the edge of the bed. Wary, she took a step back. “Ah. You’re only staying one night. We don’t need to get intimate.”

He cocked his head. “You know you want to.”

“Don’t go there. I’ll get you an extra pillow and blanket.”

She wrinkled her brows. “Nope. I’m a loner.”

“I want to tell you something.”

Cass stiffened and narrowed her eyes. She could see the wheels turning in his mind. Knowing Logan as little as she did, she had no idea what he thought. The dogs whined behind her. Something felt off.

“When I’m around you, I’m tongue-tied because I want you to like me.”

She knotted her fingers together, mostly because she didn’t know what else to do with them rather than reach for him. She turned away. When did the air in the room get so blasted thin and warm? “I see.”

His words washed over her like a waterfall. She wanted to give in, but if she touched him, she’d never be able to pull away. She turned back around. “Logan this can’t—”

He stood inches from her. His eyes flashed just as he lowered his lips to hers. A warm rush flowed from her brain all the way to her toes. She felt sparks radiate from his fingertips as he twined them with hers. A moan escaped her throat. Oh, he tasted too good to walk away from.

But in that instant, he pulled back. “That’s just a sampling,” he murmured. “We could continue all night long, if you desire.”

Cass swallowed hard. His erection jabbed into her stomach. Maybe she could turn a man on after all. More thunder crashed, spooking the dog.

Logan nodded. “I’ll be here if you need me.”

Posted by Wendi Zwaduk and Megan Slayer at 9:00 AM