Where In the World Was....Wendi Zwaduk

So where was I all last week? You might have noticed I pretty much dropped off the face of the blog-o-sphere. Wasn't on the 'net much either. Well, being carsick tends to keep one off the computer. But you were wondering where I was. Ahh... Well, I was here:
CHARLOTTE!!!

That's right. I went to the races in Charlotte, NC. Was it a blast? Heck yeah, man. Not only were we at the Z Max Drag Strip (didn't see a drag race...sorry), but I did get to see my big block modifieds, the World of Outlaws Sprint Cars and the World of Outlaws Late Models. 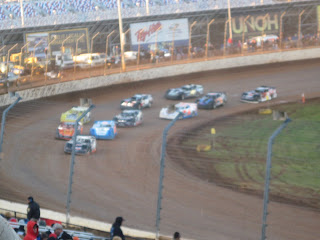 It's loud, dirty (hey, it's on the dirt track, what do you expect?) and so much fun. I think I had about 7 layers of clothes on, but oh well. Went to a couple race shops (RCR and Stewart-Haas), visited the Richard Childress Winery and got one of those plastic cups that looks like one from a take out place. Yeah, C convinced me I wanted one. 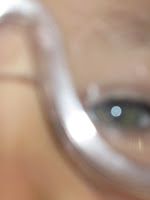 Even saw an alien, I think. Or it was my youngling. Not sure. BHe found the camera and decided he had to be independent. Doesn't bother me. Funny pic. :-)

Speaking of children...while I was down there, no I didn't get pregnant (that's a closed topic), but if you were at the Lori Foster event this past June and talked to me and my BFF Chris, you probably noticed she WAS pregnant. She's not anymore. She had the small person on my bday!! Yeah, talk about a crazy fun present. But being an Auntie, I can give the squawker back. Love him, sugar him up when he gets bigger, and send him home. I'm evil. 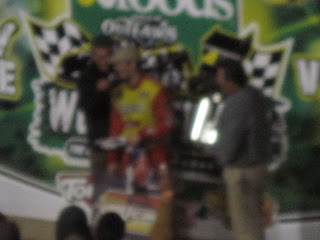 Okay so I know this is really blurry, but it was REALLY cold. At least my driver, Tim McCreadie won the Big Block Modified Race BOTH NIGHTS!!! Yeah, I was stoked. Plus he's a cutie patootie!

Well, that was my week. I didn't get anything done on my NaNo story. Imagine that. Being cooped up in the RV an sitting sideways with little moving air isn't conducive to writing. Didn't help the youngling snagged my notebook to write HIS books. Oh well. Guests the rest of the week, but I'll have a Friday Flirt up. Megan's first ever MM story comes out on Friday! Stay tuned. :-)
Posted by Wendi Zwaduk and Megan Slayer at 3:00 AM