Scarlett Valentine is stopping by right here tomorrow. Don't know Scarlett Valentine? Well, then you need to! She's giving away a $25 GC to a random commenter and potential prizes when you least expect it!

Originally from Northern California, Scarlett has spent the last fourteen years living in Ireland. She's traveled extensively through Ireland and Wales. When she's not writing, she can often be found castle hunting.

Scarlett's stories cross subgenres to explore hetero, gay and bisexual relationships in a series of stories that include time periods from historicals and contemporaries, futuristics and science fiction, paranormal and suspense, and more.

Awakening is the first book in The ABCs of S-E-X: Love by the Letter series and is available 2 November 2011 though Tirgearr Publishing.

Ysbail of Ellesmere is a pawn in her guardian's war. For decades there has been unrest between the marcher lords and Owain Gwynedd ap Gruffydd, King of Gwynedd. The most recent war had been the bloodiest she could remember in her eighteen years. Madog ap Maredudd, Prince of Powys, and his allies lost untold numbers of men at the hands of Owain's soldiers. When a settlement of truce is presented to Madog, it's at Ysbail's expense. She is to marry Bedwyr ap Owain, one of King Owain’s bastard sons, and his most notorious henchman. If all the rumors and stories she's heard are true, she knows her marriage will be rife with horror and fear. 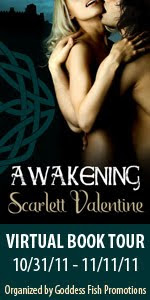 Since proving himself worthy with his sword, Bedwyr fights at his king's side. He's shed oceans of blood and sent untold numbers of men to their graves. He's become what his name foretold—the grave-knower. He's afraid of nothing, least of all death. All men fear him, including those who fight at his side, and sometimes even his own king. Terror of him lives within women's hearts; only the bravest of whores accept him into their beds. And children weave their own tales of the monster they hear him to be, embellishing the details to their own gruesome degrees.

When King Owain informs Bedwyr that he's to marry Ysbail of Ellesmere as part of a peace settlement with Madog, Bedwyr is furious. A man such as Bedwyr can only survive on the battlefield. For without love, hatred will send a man like him to the edge of insanity. Then push him over. But when Bedwyr sees Ysbail for the first time, blood-thirst turns to blood-lust, and he vows to show her that she should have no fear of him.

Want an excerpt to get you going? here it is:
“Take it off, Ysbail.” 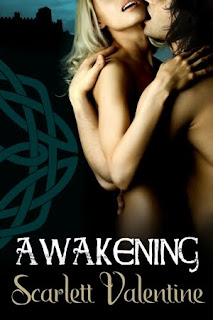 She stood her ground, shoulders back, gazing into her husband’s black eyes, daring him to make her.

Their marriage was still fresh in her mind, as was the humiliating bedding that followed. He had granted her some respect in the task by ushering would-be witnesses from the chamber, but he had done no more than that before laying her on the bed, lifting her gown, and taking her most precious possession. While he had apologized for what must be done, she still had not liked it. His taking of her had been swift and every bit as horrible as she had heard it would be.

Her father, Alun ap Wnffre of Ellesmere, had been the governor and close friend of Madog ap Maredudd, Prince of Powys. Her mother had died in childbirth, and Ysbail had barely been out of swaddling when her father was killed fifteen years previously during one of the frequent border wars. Madog had promised to raise her until she was of marriageable age. With the rapidity of the event, she felt Madog could not wait to be free from his responsibility. So afraid she might bolt, he had waited until her arrival in Oswestry from her home at Ellesmere to tell her of her betrothal.

He was right to worry, for she was to marry Bedwyr ap Owain, one of King Owain Gwynedd’s bastard sons, and his most notorious henchman. Legends preceded Bedwyr. She grew up hearing tales of his bloodlust and the carnage left in his wake. He was what his name foretold, for Bedwyr meant grave-knower.
Posted by Wendi Zwaduk and Megan Slayer at 4:00 AM

Hi Wendi!
Thanks for the advanced notice. I'm looking forward to spending the day with your readers tomorrow.

Friday I'm giving away a $25 Amazon gift card to a randomly selected commenter from the whole tour. I'm also giving out a stalker prize, and I'm thinking one more spot prize would be appropriate :-)