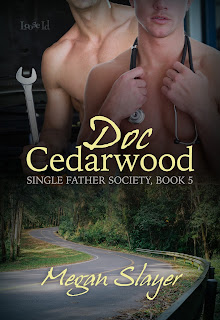 Can an accident and a rim job lead to a lasting love?

Aiden Connor wasn’t looking for a date. Sure, he wanted one, but relationships seem to be too difficult to maintain. He’s an ER doctor and doesn’t have time for commitment…that is until he runs over a curb and needs a new rim for his sports car. The mechanic isn’t anything like he expects, but could be the one man he needs if he’s willing to open his mind and heart.

Matt Phillips equated dating with disaster, but sees himself as an eternal optimist. When he sees Aiden, he wants to give relationships a try. Every cell in his body screams to get the sexy doctor naked and in his bed. But Matt has demons and addictions he’s still working through. Will he fall prey to his past or learn and move forward with the hot doctor?

EXCERPT: ©2017 Megan Slayer, All Rights Reserved
Aiden watched Aaron leave Matt’s room and a pang of jealousy hit him. He’d just gotten to know Matt and the connection was real. Was Matt that kind of guy who made everyone feel invited? Was he the type to click easily? Aiden scrubbed the back of his hand across his mouth. Man, he was overthinking things. The situation with Matt was new and fragile. Suck it up and stop expecting something so fast. But could he listen to his own advice? He ducked into Matt’s room and hoped for the best.
“Hi.” Matt sat on the edge of the bed. He’d managed to put his jeans on and wrangled a button-down shirt over his shoulders. “I really don’t like this thing.” He waved his arm in the sling. “Motherfucker, that hurts.”
“Which is why you’re not supposed to.” Aiden helped him finish putting the shirt on. “Don’t do that again without help.”
“Then be my help.” He wriggled his eyebrows. “I don’t want to be snarled up in this sling. I like to move.”
“You’ll be able to move before you know it. It gets easier.” He stood beside the bed and folded his arms. He sounded like a damn greeting card. “You’re waiting on the paperwork?”
“Yeah. I’m glad to get rid of the IV. I hate that stuff. You said saline, but it could’ve had something else mixed in.” Matt shook his head. “When you know addicts, you vow not to be like them. I don’t mind a beer every so often, but never pharmaceuticals. If I can’t have control, I’m not doing it.”
“Makes sense, I suppose, but it wasn’t mixed with anything. You like pain but on your terms.” Aiden notched his chin in the air. “Have you ever considered getting implants? The discs or whatever? They give me the heebie-jeebies just thinking about them.”
“Wow. No.” Matt struggled to his feet, wobbled, then sat back down. “I like the art and the pain, but I’m not into dermal anything. I’m also not used to being upright. Wow.” He leveled his gaze at Aiden. “I can’t stay here. I need to get out.”
Aiden recognized the pleading in Matt’s voice and couldn’t argue. He believed the best healing took place when the patient was the most comfortable—and usually at home. “The attendant will be here in a few with a wheelchair.” He paused. “It shouldn’t be much longer.”
“Are you leaving?” Matt asked.
“Yeah, soon. I’m late for a nap.” He didn’t move. He had to deal with his twinge of jealousy concerning Aaron. “I saw your business partner came back. He’ll take you home, right?”
“Yeah.” Matt toyed with the edge of the sling. “Would…would you be interested in stopping by my place? Say it’s to check on me or because we’re friends and we want to talk. I don’t care. Just come by.”
“Aaron isn’t staying with you?” He’d hate to impose.
“He’d love to be, but I told him no.” Matt tipped his head. “What do you think?”
“I think you’re supposed to have someone staying with you for the first twenty-four hours in case you have complications. You should have Aaron sleep over for a precaution.” He hated arguing and encouraging Matt to be with Aaron.
“Then you come over. We’ll talk more and you can watch me all you want. I’d planned on asking you to take me home so we could get to know each other better.” Matt reached for Aiden. “It’s forward and pushy, but it feels right to ask you.”

Posted by Wendi Zwaduk and Megan Slayer at 1:44 PM