It's a book blast and there are prizes to be won. What book? Hearthstone Alpha by AC Melody! What's up for grabs? The author will be awarding a $25 Amazon or B/N GC to a randomly drawn winner via rafflecopter during the tour. How cool is that? How do you get your name in the hat to win? Enter the rafflecopter below. Want more chances to win? Then follow the tour. You can do that right here: http://goddessfishpromotions.blogspot.com/2017/05/book-blast-hearthstone-alpha-by-ac.html 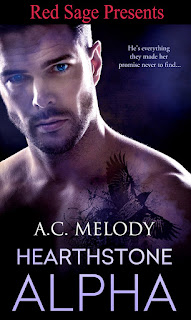 All Reyna Daniels wants is to secure her return home to Minneapolis. The last thing she needs is to find her world completely inundated by the magnetizing, hostile Corbyn Bruschard and his group of male-model friends.

Corbyn's not ashamed at being everywhere, since it's his territory, and he's certainly not going to apologize for trying to keep Reyna safe. Especially when she's his mate.

With all signs pointing to an old enemy's return, Reyna's going to have to suck it up and face her ancient Norse heritage fast. That doesn't mean she has to accept being mated to an Alpha who threatens all of her hard-earned independence.

He visibly reined it back, calmed. “Why not just let him play hookey for the day?” He suggested, apology lacing a tone that still sounded very determined. “It’s only for a few hours, Serena.”

“Because, it’s routine, Corbyn,” Serena countered. “His father and I have already discussed it. I will be joining Justin at school today. Auntie Rey, too, if she wants.”

“Well, I was going to—” Reyna started, when Corbyn’s eyes flashed to hers.

“Go to school with your nephew,” he finished for her.

No apology this time, just straight up authority.

“Yay!” Justin clapped, jumping out of Reyna’s arms and taking off out of the room again, which forced Serena to follow, but not before she leveled Corbyn with a stern look.

In the silence that followed, Reyna couldn’t tamp her anger down no matter how hard she tried.

“I don’t like bullies,” she stated clearly, looking Corbyn dead in the eyes.

“And I don’t like having to bully,” he returned gently, sincerely. “But I will do whatever is necessary to keep everyone here safe. That includes you.”

Reyna eyed him, unable to find the voice of reason inside her that should have been asking why he found it was his place to protect anyone in that household, when that should be her brother’s job. She turned away from him and felt his strong fingers curl under hers again. It succeeded in stopping her, but she didn’t look back this time.

A.C. Melody lives in Washington State, is the proud mom of two amazing sons – okay, so they're typical boys and always keep her on her toes! Stemming from a family of artists and musicians, she thrives in all things creative and would call a day without her MP3 player and coffee a day of reckoning. When she's not writing, reading, drawing or cheering on the sidelines at football games, A.C. Also enjoys gardening, which has honed her ability to dodge raindrops into an enviable skill.

A.C. Melody loves interacting with her fans and fellow authors. She can be reached at a_c_melody@outlook.com or on any of the following media sites:

Thanks for hosting! The book is available at the publisher.

Thank you for sharing today! :)