It's a book blast! Which book? Call House by CP Stiles. There are prizes to be won. Like? The author will be awarding a $15 Amazon or B/N GC to a randomly drawn winner via rafflecopter during the tour. How cool is that? Want more chances to win? Then follow the tour. You can do that here: http://goddessfishpromotions.blogspot.com/2017/05/book-blast-call-house-by-cp-stiles.html

The Call House
by C.P. Stiles

A war on vice In Washington, DC—a city constantly awash in scandals? Hard to believe, but it really happened.  Only not exactly the way it’s told here.

All Mattie Simon knows is that she wants adventure and her hometown doesn’t have any. She wants independence, maybe some romance.

All Andrew Stevens wants is to do his job as a newly-elected congressman. 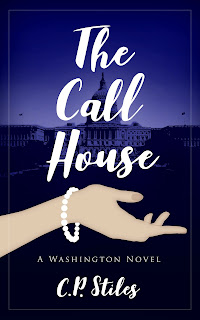 But Washington has a way of changing people—even when they get what they want.

Fast-paced and funny, The Call House takes you back to a time of relative innocence, when people flocked to the nation’s capital to do good works and instead got caught up in sex, money, and politics. What else would you expect?

BETTY Prince gently tugged on the frayed cord from the Venetian blinds. If she pulled too hard, the blinds would slip off their brackets and crash to the floor, startling the Congressman awake. She only wanted to let in the sunlight, to let Congressman Stevens know his long night of working in his office was over. It was the third time this week she’d found him asleep on that cracked leather couch. He was working too hard.

Andrew Stevens kept his eyes shut against the sun. He could feel the stiffness in his neck from sleeping without a pillow. His legs felt tight from trying to fit his six-foot-two-inch frame onto a couch four inches too short. He could tell he needed a shower. But he wasn’t ready to face the day and he wasn’t ready for another one of Betty’s lectures. She meant well, but the last thing he needed in Washington was another woman watching over him.

Too many of his colleagues’ wives had already overwhelmed him with kindness. His small refrigerator held more casseroles, more congealing dishes of Welsh rarebit, than he could eat in a month. Plus, all the dinner invitations. Always to meet some eligible niece in town visiting. Some dear female friend.

The wives embarrassed him by saying they were sure he’d be one of the brightest stars in Congress. They insisted he needed a good woman behind him to help him get ahead. His own mother, back home in Michigan, wrote him weekly to say the same thing.

C. P. Stiles is a fiction writer living in Washington, DC. This is her first novel.

I've been writing all my life.

When I first heard the story about the best-known, high-priced call house on the East Coast located right in the middle of a nice residential neighborhood - I was intrigued. I'm still not sure why. Even after spending a few years researching and many more years writing. Maybe it's the idea of having something sort of shady going on right down the street and none of the neighbors had the faintest idea. (Warning: No sex or even steamy scenes)

Thanks for helping me celebrate my book launch!