It's a book blast and there are prizes to be won. Bobbi Cole Meyer is touring her book, Driven by Destiny's Passion. Check it out! Want to know what you can win if you take part in the rafflecopter below? Bobbi Cole Meyer will be awarding one electric pink beach tote bag. (U.S. giveaway only) to a randomly drawn winner via rafflecopter during the tour. How cool is that? Want more chances to win? Then follow the tour. You can do that here: http://goddessfishpromotions.blogspot.com/2017/04/blurb-blitz-driven-by-passions-destiny.html

Lee Harris’s life of championship wrestling, gorgeous women and trekking all over the world to manage his chain of gourmet 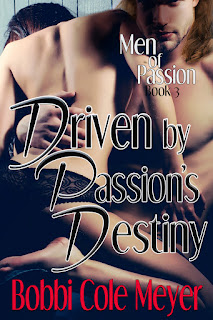 restaurants is over. A spinal injury puts him in a wheelchair. Despite a will of steel that has seen him through numerous injuries, there is no getting up and walking away from this one. Confused, bitter and angry, Lee resists all efforts of rehabilitation to help him adjust to his new life. Frustration is added to the mix when he meets Cassie, the first woman he wants since his accident. Wants and can’t have.


Cassie Sheppard has never gotten over her crush for the green-eyed, charismatic wrestler, Lee Harris. Now fate puts him within her reach. She is assigned to be his live-in physiotherapist. Despite his coldness toward her she finds herself falling for him more each day. She is determined to break through his stubbornness to help him regain his mobility, sexuality and self-esteem. Even if it costs her a broken heart.

Cassie sighed with shivering contentment as Lee tenderly explored her body. He ran his hands down the length of her torso and back up, leaving in their wake a wave of chill bumps that seemed to multiply and skitter throughout her senses. As he cupped her breasts and rubbed her hardened nipples with his thumbs, she caught her full bottom lip and emitted a shuddering sigh.

Trembling, her breathing labored in ecstasy when Lee leaned to suckle each breast. When he released one, he blew on it gently. The coolness of his breath on her moist skin was like an aphrodisiac, sending sensual shivers down her spine that coalesced in her sensitized area between her legs.

She felt she might die as a tidal wave of emotion washed over her when he tweaked each pebbled breast tip with his tongue. Eager to claim his mouth in a kiss, she twisted her fingers in his hair to urge him up.

The desire to be one with him, to have him deep inside her, their bodies linked, her wet with desire, him driving to her core was all she could think about. She wanted him more than she believed it was possible to want a man.

Her response intensified as she strained against him—opened for him—reached to direct him inside. Every quivering nerve in her body tingled, creating a buzzing in her head that grew louder and louder.

The buzzing alarm persisted, shattering the dream at the crucial moment when Lee was about to enter her. Frustrated, Cassie reluctantly opened her eyes. Her mouth was cotton-dry. She was still shaking with sexual anticipation, but with her waking reality came the colossal letdown.

She ran her hand down her arm, feeling the goose bumps. She yearned for that mind-blowing climax she’d almost achieved in that fantastic dream. It was the same dream she’d had for years, varying only slightly in intensity.

She glared at the clock, hating it for interrupting. Inexplicably, as always, that fantasy dream had kindled an overwhelming, obsessive desire to experience what her imagination tortured her with—ephemeral glimpses of satisfaction in Lee’s arms and their ultimate body connection.

Cassie released a dejected sigh as she sat up and hugged her knees. For a moment she allowed herself to bask in the dream’s sizzling afterglow, her thoughts running back to the evening before and her first face-to-face meeting with her fantasy lover, Lee Harris.

Though their initial meeting hadn’t been as good as she’d hoped it would be, it was better than she’d expected, given what she’d heard about how despondent and irritable he’d become—and how unruly he was with the other therapists. All of them had given up on him. She would not.

Bobbi Cole Meyer is the pen name for Barbara Meyer, who relocated from her hometown of Jackson, Mississippi, to Nashville, Tennessee to pursue a career as a lyricist. Over the years Barbara has had numerous songs she co-wrote cut by major artists such as Tom Jones, Loretta Lynn, Barbara Mandrell, Barbi Benton, Stella Parton, The Soul Shakers, the Poppies, Bandana, Mason Dixon, the Wright Brothers and several others. She also co-wrote the theme song for the Italian movie, Summer Affair, with well-known guitarist and composer, Bucky Barrett.
Now residing in a small town outside Nashville, Tennessee, with her husband, Hank, Barbara is busy pursuing a second career, writing fiction, which she claims is her first love.
Barbara’s slogan is, “grab them with the first paragraph and don’t turn loose until the last period.”
http://www.myromancestory.com/author-name/bobbi-cole-meyer/
https://www.goodreads.com/author/show/7313940.Bobbi_Cole_Meyer
https://www.goodreads.com/book/show/34672288-driven-by-passion-s-destiny
https://www.amazon.com/Bobbi-Cole-Meyer/e/B00FG62BRI
http://www.bobbicolemeyer.com/
https://twitter.com/colecolemeyer
https://www.facebook.com/cole.meyer.1000