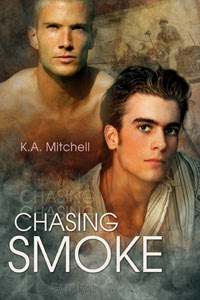 An old mystery brought them together. Solving it could tear them apart.

In the best of times, Daniel Gardner hates visiting his family. With his boyfriend pressuring him for a mortgage-serious commitment, Christmas in Easton, PA sounds, for once, like a welcome escape. His old house holds more than memories of a miserable adolescence, though. It has Trey Eriksson.

At seventeen, Trey was taken in by the wealthy Gardner family after his father was jailed for his mother’s murder. Until he left for the Army, he fought a double-edged battle—for proof of his father’s innocence and against his attraction to Daniel.

Fifteen years later, things haven’t changed. Trey is still looking for the real killer. And Daniel has never forgotten how Trey used to sneak into his room at night.

Now new clues to the murder are resurfacing—and so is Trey and Daniel’s sexual chemistry. Except this time, Trey has come to terms with his orientation.

But their connection may not be enough to overcome the mistakes of the past. Not while a murderer still walks free…

Product Warnings
Anyone who would rather not read about hooking back up with someone who broke your heart, minor suspense, hot guys who can handle guns and each other, and lots of steamy gay sex probably isn’t reading this warning anyway, but if you are, back away slowly and keep your hands where I can see them.

Those who know me, know that since I was given four of Ms. Mitchell's books and bothered to sit down and read them, I've been hooked. Yuppers. Her characters are like reading about friends. I can't put the book down and I can't walk away.

Same goes for Chasing Smoke. I put off reading this book for a while. I'd like to say it was because I had all kinds of fantastic things happening. But alas, the truth is less glamorous. I didn't want to read it and be at the end. When I say being in the characters' world is like really being there, I'm not kidding. I didn't want to have no more K.A. Mitchell to read. Sad but true.

I'll be honest, when I started this book, I wasn't real impressed with Daniel or Trey. I thought both were self-serving and a bit put-off-ish. I should've known better. Ms. Mitchell has a way of writing characters that I initially dislike, but then love because of their peculiarities and coolness. I loved Daniel's zeal. When the guy gets a thought in his head, hell couldn't move it. And he's got his heart on his sleeve. So sexy. Then there's Trey. I found myself more than once wanting to sock him in the head, and then wanting to comfort him. Yeah, he got under my skin that much.

The plot has plenty of twists and turns and quite frankly, I didn't see the ending coming and I loved it. Up until the last few paragraphs, I still wasn't sure how things would end. Then I shut the book, went to do something else and continued thinking about Trey and Daniel. They literally invaded my dreams. Not that I'm complaining. Based on their descriptions...yum.

If you want a book that's got heat and lots and lots of heart, then you can't get any better than Chasing Smoke. I totally recommend this read.