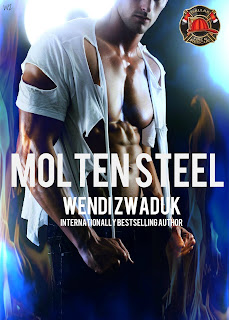 Breaking down was never this freeing.

Rory Speedle charms the world and rocks the stage with his band, Disaster Transport. He’s dealt with ex-girlfriends, overzealous fans and letters from a stalker, but nothing has prepared him for his next concert date. When the tour bus catches fire on the outskirts of Dallas, he loses more than just his instruments. His desire to create music is gone and he believes his hope is next. Then he meets Cady Hollister and everything changes. She inspires him and stokes his desire.

Cady knows the handsome rock and roller won’t be in town long. He’s only at her hotel until the band bus is replaced. Still, he makes her feel like a woman again—sexy, desirable and beautiful. He claims he wants her in his life as more than a passing fancy. Can he convince her to five him a try or will his fame keep them from finding the love they both deserve?

Love could be his salvation, if he’s willing to work for the woman he wants.

©Wendi Zwaduk, 2016, All Rights Reserved
Rory stood in front of the door of room four and eased the key into the lock. The knob didn’t turn. Maybe it was sticky. He tried again, but with no luck. He rested his head against the door and sighed. Shit. He yanked the key free. He’d have to go back downstairs.
“There you are.” The woman from the foyer rushed up to him. “Matt gave you the wrong key. Sorry. He mixed up the one for room five with four. No idea why or how, but here you go.” She brushed her hair from her face and eased the new key into the lock. “We could probably get card readers for the doors, but I can’t afford all of that tech right now.” She twisted the knob and opened the door. “There you go.”
“Thanks.” He headed into the room. Everything was white. White walls, white bedding, white desk and lamp, white couch. “It’s very clean in here.”
“Yeah, sorry. My grandmother liked white.” The girl shrugged. “It’s all vintage, so I can’t see getting rid of the furniture. Except the mattress. It’s new.” She massaged her temples. “Sorry. I get ahead of myself and don’t always say the right thing.”
“It’s fine.” He flopped onto the bed and breathed in the clean scent of the detergent. “I could sleep for a week.”
“Put the hang tag on the door if you don’t want to be disturbed. We don’t have food here, but the Chinese restaurant at the north end of the block delivers and the pizza place next door is good, too. We’ve got the pool on the ground floor and a lounge on the second floor. It’s not stocked right now, since I haven’t had guests in a while, but you’re free to go in there. We’ve got the piano and a stage.”
“A piano?” He rolled over and focused on her. In the better light, he saw her more of her features. He sat up. She stood no more than five-five and probably came up to his shoulder at best. The blue scarf he’d seen wasn’t a scarf, but rather a bright blue swath of her hair. Her blue eyes sparkled from behind dark rimmed glasses. He swept his gaze down her body. She wasn’t like any of the women he dated. Where she was short and buxom, his dates tended to be willowy and tall. The jeans hugged her curves and her tank top strained against her breasts. His mouth watered. He wasn’t one to fall in love at first sight, but she captivated him almost as much as the architecture.
“I’m Cady, by the way. If you call down to the desk, you’ll probably get me.”


Posted by Wendi Zwaduk and Megan Slayer at 6:58 AM