Written Together by Wendi Zwaduk 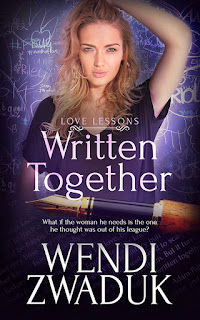 What if the woman he needs is the one he thought was out of his league?

Adam Pallas knows what he wants out of life—to teach history, to be happy and to have a hot woman by his side. He’s got one out of the three. He should be happy, but he’s not. There’s one woman who grabs his attention every time. The catch? She’s very much out of his league. Can being himself actually snag him the woman of his dreams?

Melissa Murphy isn’t looking for love, but every time she sees Adam her plans go sideways. The English teacher knows there’s a confident, hot man hiding behind the slightly nerdy history buff façade. But her past and the things she wants between the sheets tend to scare men off. She believes the odds may be stacked against them. Could it be their lives are perfectly written together after all?

Publisher’s Note: This book was previously released elsewhere. It has been revised and reedited for release with Totally Bound Publishing.

©2018 Wendi Zwaduk – All Rights Reserved – Do Not Reproduce Without Permission
“Some people are great on paper but crap in real life. That’s what Kevin and I were…are.” She stared toward the ground. “Getting engaged to him was my biggest mistake. He’s a parent and I’m a teacher. Not a good mix. I thought we’d be able to overlook it. He couldn’t. I ended up giving ninety percent and he called his ten in. Sad.”
Adam wanted to pry. He wanted to know everything about the relationship and the break-up so that in case he and Melissa actually tried dating, he’d know what not to do. Instead of speaking, he stayed quiet and listened to the sound of their breathing.
“Look, the guy embarrassed the hell out of me and then acted like he was the jilted party, yet I took him back. No more. I don’t mind joshing among friends, but public embarrassment is not cool.” She finally looked up at him. Her eyes shimmered and the blush across her cheeks swept down her neck. “Gee, this is awkward. All this was supposed to make you feel better. I wasn’t supposed to ramble on.”
Adam reached out, hesitant to touch her. She was his friend and sounded like she needed consoling. What the hell. He snagged her in a hug and stroked her hair. “You helped more than you realize.” He stifled a chuckle. “Chasing Tessa was a pipe dream and I’ve been turning the situation over in my mind. I knew she wasn’t interested, but the game was too much fun to stop. She was my mystery girl—kind of.” He loved the way she felt in his embrace, so small and curvy. The more he talked about Tessa, the more he realized he wanted Melissa. “But now I’m confident it’s time to move on. I’m meant for something else besides chasing.”
Melissa rested her head on his shoulder and didn’t pull away from him. “Mystery isn’t always what it’s cracked up to be, but then again, neither is reality.”
This time he did chuckle. “I got a life lesson out of the experience.” Besides, holding Melissa cemented to him the fact that there was way more to life than chasing a mystery.
“What was the lesson? Don’t push people?” She tipped her head and stared up at him.
“Know your limits.” Adam rubbed her back. God knew the longer she lingered in his arms, the more likely he was to embarrass himself, but he didn’t care. He liked the way she cradled against him. “I’m guessing you could use that lesson, too? If Kevin isn’t working out, then don’t be afraid to cut him loose for good. You’ll feel better.” So would he. Melissa deserved better than Kevin, the pompous jerk.
“You’re right.” She still didn’t pull away. “We should really go back in.”
“Probably.” He wanted to kiss her. Was that pushing things too far?
“We should do this after school,” Melissa murmured.
He paused. Do what? Kiss? Hell, yeah, he wanted to kiss her. But he wasn’t sure if she was truly done with her boyfriend. She stared at him and he fought the urge to squirm. She wanted an answer. Adam nodded. “I’m game.” For running and so much more. The electricity between him and Melissa couldn’t be a fluke.
“I’ll hold you to that.” She wriggled from his grasp. A new sparkle lit in her eyes and she smiled again. Melissa poked him hard in the chest. “Catch me if you can.” She spun on her heel and sprinted away from him.
“You bet.” He started after her, his spirit renewed. “You certainly bet.”


Posted by Wendi Zwaduk and Megan Slayer at 2:38 PM