Never Give You Up by @MeganSlayer #mmromance #gayromance #vampires #paranormal


Battle Scarred 5: Never Give You Up 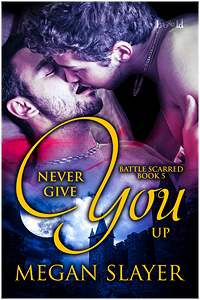 Through time, distance and confusion, we will always find each other.
Galen Collins knows who he loves, but the vampire of his dreams, Anders Von, isn’t interested. What’s a vampire to do when he’s been rejected? Go to the clubs for sex. He’ll get Anders out of his mind one way or another. But there’s something wicked on the horizon in the form of a virus meant to wipe out supernatural beings. Forces who hardly know Galen are out to keep him and Anders apart. Will he allow the demons to win, or will he chase Anders to the ends of the earth?
Anders has always had a crush on Galen, but things never worked out right time-wise. Galen is the one vampire to make his emotional heart race. He wants to strip Galen to his core and explore every inch of him. Will Anders take the chance to be with Galen and discover how well they fit together or will the virus take Galen before Anders makes his move?


Available from Loose Id http://www.loose-id.com/battle-scarred-5-never-give-you-up.html or wherever ebooks are sold: https://books2read.com/u/mV7LKM

Anders held the phone on his lap. Feed Galen. He’d never offered himself up to Galen. Even in their lowest times… Galen offered his vein plenty of times, but Anders didn’t reciprocate. Why? He’d been scared. What if they were supposed to be together and he didn’t feel the same way for Galen? He’d be giving blood to a man he didn’t love. But was that the truth? Now that someone had done something horrible to Galen, the feelings he’d kept down for so long welled to the surface. Love was possible, but he loved Bethany and Johnson, too. He cared about them all even more because he saw life could be so precious. But who did he want?

He shifted his position on the arm of the couch and watched Galen. Some supers were real assholes. Only a dick would drain someone, but only a dick would refuse his best friend too. He nudged Galen’s foot. The vampire still didn’t move.

He scooted off the couch and knelt beside Galen. “Hey.” He patted Galen’s face. “Gale. Hon.” He swatted Galen’s unbitten thigh, but the vampire didn’t move. “Stop dicking with me. If this is a joke, I’m leaving your ass for a younger, prettier model.” More panic set in. “Galen, I’m going to fuck you.”

“Stop shouting,” Galen mumbled. “You can’t leave me. I paid the rent this month.” The muscle in his jaw tensed. “You won’t fuck me, so don’t tease.”

He’d gotten an answer and snark from Galen. The man wasn’t completely dead. He held Galen’s hand and rested his forehead on Galen’s fingers. “I called Vita. She’ll be here soon. Until then, you need to eat.” He bared his fangs and ripped into his own wrist. “Come on. Take mine.” He rubbed his forearm against Galen’s mouth. “Take it.”

“No.” Galen didn’t open his eyes, but he did shake his head. “Whatever this is—it’s bad. I don’t want you to get it.”

“What?” He smeared his blood onto Galen’s lips. “The poison or whatever it is probably isn’t all of the way through your system.” Well, he hoped not.

“Hon, you’re a vampire.” He dribbled more blood onto Galen’s lips. “You already died. You can’t do it again.” Technically, he could die a final death and would end up in a pile of ash, but Anders refused to let that happen. “Stop joking.”

“I’m not.” Galen managed to open his eyes. Instead of the dark luster and shimmer, the sparkle in his brown eyes dulled. The middle reminded him of coffee with a little cream—not a black pupil. “I’m dying.”

Posted by Wendi Zwaduk and Megan Slayer at 6:54 AM