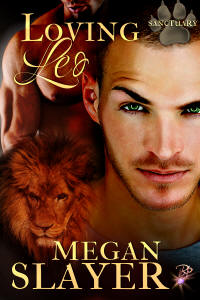 This lion’s ready to claim what’s his on the day made for lovers.

Figuring out what Valentine’s Day isn’t easy, especially for lion shifters. Until coming to Sanctuary, Leo had never heard of the holiday, but he’s not about to let the special day go by without taking notice. He knows his heart and it belongs to Axl. He’ll do what it takes to get Axl’s attention, but will Axl share his feelings?

Axl is the brute of the group and has no need for Valentine’s Day. He’s tough and takes what he wants—including Leo. He doesn’t need a holiday to dictate his actions. That is until Leo bares his soul and his needs. Will Leo’s honesty be enough for Axl to come to terms with his feelings? Anything can happen on Valentine’s Day.

Leo sighed. He still didn’t understand all the little sayings, and all he pictured was John’s head turning into a pair of ears—with no face. He scratched his head and focused on why he’d come to John. “I like being a shifter and all, but I want to make some changes.” There. He’d said it. How would John react?
“You can’t be a lion all of the time or abandon your animal side. That’s impossible, so what did you have in mind?”
Leo tugged on his hair. “I want to change this. I want to cut it. Can I do that?” He wasn’t sure why he felt compelled to ask. He’d seen plenty of shows on television where people simply cut their hair without asking anyone’s permission. But as far as he knew, they weren’t shifters.
“Oh. I don’t see why not. It’s your hair, so it’s your choice.” John cocked his head. “I can set up an appointment with the guy who cuts my hair.”
“There’s one more thing.” He paused and sucked in a ragged breath. “I want a tattoo.”
John’s eyebrows rose. “A tattoo?”
“If that’s what those drawings on skin are called, then yes, a tattoo.” He knew what he wanted, too.
“I don’t know how that would affect your lion form, but it’s your body.” John frowned. “I haven’t thought about it. Would the tat show up on the lion’s body? And would cutting your hair affect your mane? I’m not sure.”
Leo had asked for the first two things without much resistance. Now for the third. “I want to get a piercing, too.”
“Oh boy,” John said. “You want to go all in. Is this because of Axl?”
“Huh?” He’d wanted to stand out. Maybe, if he had something special about him, Axl would notice, but that wasn’t the main reason he wanted the tattoo or the piercing. He wanted to be himself. Being different felt right.
“You and Axl are tight, but he’s so…withdrawn and angry. Are you trying to get his attention or be like him? You’re handsome the way you are—no holes or ink needed.”
“I want to be different.” He wasn’t sure why. He just knew that’s what he wanted.
“A tattoo will certainly make you different.” John folded his arms. “I can’t tell you not to, but I’d suggest running it by Axl.”
“He’s not my mate.” Although, I want him to be.

Posted by Wendi Zwaduk and Megan Slayer at 6:56 AM