Must Be Doing Something Right 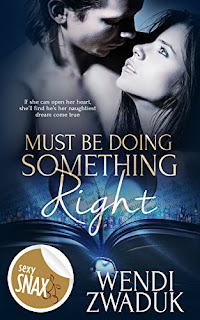 And now for an excerpt:
©Wendi Zwaduk, 2010, All Rights Reserved


I want a woman who will drive me crazy in every possible way.

If she loved him in return.

Nathan Waterford slammed the door to his navy blue Blazer and strode across the asphalt into Besta Pizza Around. He smoothed his hand over the lump of bills in his pocket and tucked the insulated pizza bag under his arm.

On a steamy Saturday night in July, he’d rather be in bed with the woman of his dreams, not working to earn a dime he didn’t need. His day job as an estate lawyer paid the bills, but being at the pizza shop got him closer to Courteney, the woman in his heart.

Hell, if he played his cards right, his desires might come to fruition. One day...

Crestline, Ohio wasn’t a teeming metropolis, but Nate and his business partner, Arran Mayes aimed to create the best little restaurant in the quiet farming community. The scent of tomatoes and yeast swirled around Nate, making his stomach rumble. When did I eat last?

Behind the bar, Arran stood drying a beer stein. “Well, you got your wish, my friend.”

As he slapped the silver bag onto the polished wooden bar, Nate glanced at the remaining patrons in the dining room. A couple giggled in the corner booth, while a trio of students wolfed down the last few slices of pizza at the round table under the window. Good times. He remembered being so carefree, before he had to become a man and work for a living.

“And you’re talking about what?” Nate shook his head and leaned on the bar rail. “Get me up to speed.”

Arran sighed and plunked the glass onto the towel. “You missed drama involving your girl.”

His wish? His girl?

Confused, Nate stared at his ruddy-haired friend. If his memory served him, Courteney Bennett belonged to no man. Nate had seriously considered making a play for the saucy little romance writer. From her chocolate-coloured tresses and her consuming mocha eyes, down her curvy body to the tips of her toes, he longed to make her his. He itched to grasp her hips while driving into her from behind. She turned him on like no other.

Thank God the bar covered the tent in his jeans.

“Don’t look at me like you’re surprised.” Rolling his eyes, Arran picked up a wide mouth wine goblet. “As you know, Courteney and Byron split two months ago. Well, he came back to—” he hooked his fingers in the air, “—make things right.” Arran snorted. “His version of making things right meant parading his new girlfriend, Amber something-or-another, right under Court’s nose. The jerk.”

Posted by Wendi Zwaduk and Megan Slayer at 4:23 PM