All I Want For Christmas....Finale! 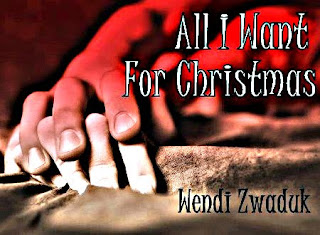 Few people had the power to commit Santa to the naughty list. Actually—just one. Jessica. The sheer material captured her breasts, but left nothing to his imagination. The crimson in her cheeks and her supine position in the chair meant one thing. He finally got his Christmas wish—well, one of them.

He’d captured her in the midst of pleasuring herself.

His tongue thickened in his mouth. He needed to taste her, but damn if he could make my lips move. She captured his breath with a smile and his cock hardened behind his zipper. The fuzzy red pants might have kept him warm during the deliveries constricted around his legs. He should shrug out of his jacket, but damned if he could move.

Jessica licked her lips and his dick jerked. The marabou dusted her hips as she stood. “Reindeer got your tongue?”

Her action jolted him into action. Nodding, Nick crossed the space to her and wrapped her in his arms. Jessica squealed.

“I caught you in the act,” he murmured against her neck. Her vanilla scent curled around him as he nuzzled the delicate skin. “I like it.” He palmed her ass, adding quick swats to accentuate his words. “You’ve made the naughty list, my love.”

“Not yet.” She disengaged from his arms and stepped back two feet. Taking a ribbon of silk in each hand, she tugged open the bow between her breasts. The diaphanous material skimmed down her shoulders and pooled at her feet, leaving her in the tiny thong.

Nick rubbed his cock. “Come here.” The logs on the fire crackled. Heat engulfed the room, but nothing like the flames of desire licking his body from within.

“For my present?” Jessica bridged the gap and dropped to her knees. She stared up at him with wide eyes as her fingers worked the zipper on his now snug pants.

“Jessica.” He groaned as she reached into his trousers and removed his cock. Nick thrust his fingers into her hair when she nuzzled the engorged flesh. “Take me in your mouth, love.”

She hooked her fingers into the waistband of his pants.

“No love. Like this.” He released her hair and stilled her movements. “You look beautiful on your knees.”

Jessica cupped his balls as she kissed the crown of his dick, lapping the come from the tip. She encased him in her mouth and hummed, the vibration going straight from his penis to deep in his belly. Love and lust flooded his body and tightened in his balls. His head lolled on his shoulders. Her tongue curled around the tip of his cock, swathing him in her liquid heat.

“Jess.” He pistoned his hips, fucking her mouth and teetering on the edge of oblivion. He swayed on his feet. “Too much, sweets, but damn it feels good.”

As the orgasm built in his veins, Jessica released him with a smacking pop.
Gasping, Nick stared at her through heavily lidded eyes. The first fingers of sunlight stretched across the room and illuminated her blond hair, giving her the look of a halo. His wife might be pure of heart, but she was far from angelic. “If I am on the naughty list, I believe I need a reprimand.”

Nick shivered and sat down in the armchair. “Come here.”

Grinning from ear to ear, Jessica crawled across his lap, her ass proudly displayed. Nick slapped the creamy flesh, leaving a pink handprint. “You forgot the rules.”

“Punish me.” She wiggled her ass, pinning his dick between the fur lining his coat and her heated skin. “Please?”

He grabbed the beautician’s shears on her makeup table. “You give me no choice.” He snipped the expensive silk, leaving her bottom completely nude. Cream from her pussy dampened his thigh. “My Jessica.” He smacked her butt four more times, twice per cheek.

Her moans filled the room and her hips pumped on his lap. “Fuck me, Nick.” Jessica peeked over her shoulder, her eyes twinkling. “I need to feel you inside me.”

“Stand, my love.” When Jessica did as told, Nick kissed the tender flesh. He wrapped his hand around his erection, coating himself in his liquid excitement. “Turn around.”

He gasped as she straddled his lap. Using both hands, she positioned him at her opening. Jessica slid down on his length, burying him to the hilt in her moist heat. Balls drawn tight, he wouldn’t last long. Nick tweaked her turgid nipples. He sucked one hard tip between his lips. The taste of sweat and vanilla exploded on his tongue. Releasing her, he tugged hard on her hips and began to pump into her body.

Jessica twined her arms around his neck and feathered kisses over his face. “I love you, Nick.”

“I love you, too, Jess.” Nick surged upward and emptied his seed into her womb. His heart thundered as he sank back in the chair and cuddled her. With Jess, every orgasm rocked him to the core.

“Merry Christmas, Nick.” Her breath fanned on his skin. “Did you like your present?”

“This is what I wanted for Christmas.” He sighed, his body relaxing. Sleep beckoned. “Loving my wife, seeing her hot for me. It’s all I wanted and more.” He chuckled and toyed with the destroyed satin. “Seems I ruined the gift I gave you.”

“You made up for it.” Jessica kissed him, stroking the hairs at the back of his neck. Her tongue tangled with his as she dropped her hands and unbuttoned his jacket. She spread her hands over his undershirt. “Let’s go to bed. You’ve earned a long winter’s nap and I’m getting cold.”

He scooted forward in the chair and kept her in his arms. “After we make love three or four more times, chilly girl.” Nick stood and strolled to the bed. “I’m not nearly done warming you up and exploring your many gifts.”

Jessica giggled and tumbled against the sheets. “The greatest gifts are always worth sharing.”

Merry Christmas to all, and to all a steamy, sexy night!!

W.Z
Posted by Wendi Zwaduk and Megan Slayer at 4:00 AM