Anida Adler - The Ancient - You Gotta Read It!

Meet author Anida Adler! Her book The Ancient came out September 15th from Loose ID. Sound interesting? Then read on! You won't want to miss this fabulous writer!
You can visit her other stops by going to: http://goddessfishpromotions.blogspot.com/2009/09/virtual-book-tour-ancient.html 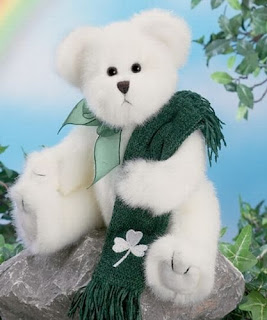 In keeping with the Irish theme to her story, Anida will be giving away a Shannon O'Shamrock bear to one randomly drawn commenter from the tour, so be sure to comment early and often!

Until we moved house in September, the desktop computer stood next to the television in our sitting room, and I wore headphones, listening to loud music, when I needed to write and either the kids or my husband wanted to watch TV. I got the netbook I'm working on, sitting in a cafe in town, at the moment. The reason for that was because I work pretty much all the time, and with the netbook, I c 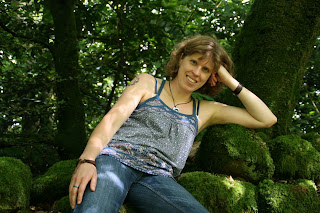 ould sit beside my man while he watched the box. That way I could be close to him without having to stop working.

We moved house recently, and I now have a wonderful workspace in front of a window that overlooks the Cooley Mountains. More space, yippee! It also helps my eyes to be able to look out of the window every now and then. I'm so far too poor to afford a nice flat screen, so when I work at the desktop I have to wear glasses, and I have to watch out for eye strain.

2. Where do you get your ideas for your work?

That's almost impossible to tell. Out of probably about twelve novels I've written, I can only remember the seeds that gave birth to two of those. The rest I couldn't tell you if I tried.

With my very first one, I created a fantasy world that was a translation of the isolation I felt as a brainy girl growing up in a very working class environment. I'm sure many people feel that they are alone inside their heads, looking out at the world, no matter how close they may be to other people. I don't

make friends easily, and when I tried earlier this year to make a deliberate effort to socialise more and maintain more friendships than I had before, I became desperately unhappy. I've now made peace with the fact that I prefer having a few close friends instead of a plethora of superficial friendships.

The other novel whose birth I can remember vividly is The Pebble, my novel published through Amira Press under author name Nadia Williams. I was cycling towards Warrenpoint along the shore of Carlingford Lough when I became aware... let me stop here. I know the difference between fantasy and reality, but for me, fantasy is so vivid that I prefer leaving out the 'I imagined' or 'I thought'. So just bear with me here. I became aware of my bicycle's spirit forming an elated bubble around me, gaining life from my enjoyment of the cycling. This got me brooding out a scenario where a woman bought a bicycle which was possessed by a spirit from someone who lived long ago - of course, it would be a sexy hunk. But how would his spirit have got into the bicycle? I pondered the possibility of the ore which made the frame having contained a stone to which his spirit had been banished by a witch. If you read The Pebble, you can see how far the eventual plot strayed from that initial story idea, but it might also be interesting to see the remnants of the first imaginings still embedded in its foundation.

3. Which authors do you admire and why?

There are a few authors I really love, because their books leave me silent, stunned and withdrawn when I finish. I am, however, really pathetic with remembering author names. Even so, I have a few favourites: Terry Pratchett, James Morrow (though I've only read 'The Last Witchfinder' so far), Tricia Sullivan (who is also a cyber-friend of mine), David Gemmel, Diana Wynne-Jones. I'm bound to think of a few more as soon as I've sent you the answers to these questions and can't add more!

4. Any tips or suggestions for new writers?

This is not the first time I've been asked this question since starting my mini-tour for The Ancient, and in truth, it makes me feel uncomfortable. I feel as if I'm a beginner myself, as I never stop trying to learn more, trying to write better. My good friend Mike Stone, also an author, was the first to gently chide me for still calling myself a beginner, and I know few other writers consider me to be one.

What I told a new group of teens at the Apple Tree Foundation, where I lead a writers' workshop on a voluntary basis, was this:
a. Cut out adverbs. It forces the rest of your writing to be stronger.
b. Read 'The Turkey City Lexicon' http://www.sfwa.org/2009/06/turkey-city-lexicon-a-primer-for-sf-workshops/
c. Read 'Holt's Ten Mistakes' http://www.holtuncensored.com/hu/the-ten-mistakes/
d. Read 'Everything you need to know about writing successfully in ten minutes' by Stephen King http://mikeshea.net/Everything_You_Need_to_Kn.html

I gave a different answer to this question every time I answered it, I think, but there is just so much you need to know if you want to write stories other people will want to read, and enjoy reading. I would also wager each author you speak to would give you a different answer to that, though there might be similarities. Listen to all of them, and try their advice before discarding it. Take the adverbs thing, for instance: when I was first told this by my dear first writing mentor, Pat Jacobs, I thought it was stupid, but I trusted her, so I just did it. I couldn't believe the amazing effect it had on my writing. You have to give something that might not sound right, a shot before you decide it doesn't work for you. Unless it threatens your voice... urgh, there is just so, so much to say, all the lessons I learned over about six years of working at writing the way other people work at a fulltime job, and this answer is getting too long.

This http://nadiawilliams.wordpress.com/2009/09/17/small-adventure/ (Thank God, a short answer, I can hear you think. Well, wait until you follow the link :P)

6. Are you a people-watcher? If so, tell us a funny or interesting story about someone you saw.

I love watching people, but the story that comes to mind is one I heard from someone else. I'm in fact not sure if it's true. A very abusive woman walked into a Tesco (big supermarket chain in Ireland and the UK) with her two children. She was truly horrible to staff and other customers alike, loud and rude. When she got to the checkout, the youngster at the till asked: "Are your kids twins?"
"No, you moron. How can you think they're twins? Are you blind or just stupid? They're not the same age and they don't even look alike."
"Oh," he replied calmly. "I just thought they were twins, 'cause I couldn't imagine anyone shagging you twice."
Want to know more about The Ancient? Here's the blurb and a fun excerpt:
Blurb:

What would you do if you fell in love with the goddess of death?

June 1945 - Tadhg Daniels sees a woman clad in strange clothes and a feathered cloak, but she’s invisible to everyone else. He’s convinced his mind has been unhinged by the horrors of the D-day landings four days before, but when she appears to him again, the woman proves she is real. She is Morrigan, goddess of death, come to warn him his life is about to end.

Morrigan is disturbed by the man she meets. He looks in her eyes unflinching, while all others avoid her gaze. She’s never found such a strong will to survive in any of her charges before. He refuses to accept he’s going to die.

There is a way for Tadhg to cheat death, a secret Morrigan has guarded for millennia. Morrigan can save him if she takes him as her lover, but sex with the goddess of death will change him. He needs time to decide if he’s prepared to give up his humanity in order to be with her forever.

But Tadhg is not the only one who knows Morrigan’s secret. Someone else wants to take by force the gift she can bestow. And he’ll stop at nothing to get it.

“Look above you.” He searched the ceiling. “No, I mean at the bedstead.”

Tadhg shuffled his elbow under him and studied the ornate wrought-iron metalwork. For a moment, he didn’t know what she meant, then he saw the chains and blanched. He turned to Morrigán. “No. The shackles in that poem were a metaphor, Morrigán. I don’t do that sort of thing.” Except in his fantasies, but he’d die if she discovered that.

“I’m not asking you to. The shackles are not to bring pleasure to either of us, it is for my protection.”

He frowned and sat up. “Your protection? What the hell kind of man do you think I am?”

“I’m sure you’re very honourable. I told you, the change you’ll go through will be difficult. Just because I’m immortal doesn’t mean I can’t hurt and bleed.”

Tadhg felt cold dread trickle from his scalp down his neck and over his shoulders. What was he letting himself in for? He remembered the panicked feeling of his lungs filling with blood, the horror of his airway blocked. He lay back, stretched out his arms. Then he closed his eyes and slipped his wrists into the old-fashioned shackles hanging from chains on the bedstead. Every muscle in his body was tense as a bowstring.

He heard the rustle of fabric as she came closer, felt the dip of the mattress as she knelt beside him, making the sheet slide over his skin with a tantalising brush. For a moment, he wanted to snatch his arms from the shackles, but he forced himself to keep still as Morrigán closed first one, then the other bond, slipping the pins that held them fast.

The sound sent a rush of blood to his cock.
Posted by Wendi Zwaduk and Megan Slayer at 4:02 PM

Great interview! The Ancient's going on my TBR. :)

Doesn't it sound awesome! It's on mine too.

Thanks, Anida for stopping by.

Hi there, sorry to be late to the party! Blame the time difference and the fact that I can only come and internetise once a day for an hour until our home broadband is connected )c:

Thanks, Cari, I'm so glad you enjoyed the interview. And I do hope you enjoy The Ancient!

Yeehaa! I just assigned a number to each and every commenter on my virtual book tour, including hosts, then went to my research assistant and asked him to pick a number. He saw no names!

The winner of the Shannon O'Shamrock bear is Patricia Esposito, who commented on Sheri Lewis Wohl's blog. Congratulations, Patricia, I'll email you to get your snail mail address to send your prize.

Thanks to all who commented, I really appreciated the warm welcomes all over the blogosphere!