I asked Lorhainne to join me today on the blog. Welcome, Lorhainne! Please be sure to stop by her other blog stops and do comment! We'd love to hear from you! Plus, you can win prizes. You can find her other blog stops at: http://goddessfishpromotions.blogspot.com/2009/08/virtual-book-tour-captains-lady.html
To get to know her a bit better, I asked her what colors her writing?
Well that would be life experience. I draw from those times of joy, sorrow, pain or anguish, many that I have witnessed first hand with family and friends.

I don’t write light and fluffy. I draw from situations that test each one of us. You those times in your life, when you’re thrown that curve ball that rocks your world. You stumble for a bit until you figure out how to regain your balance. It’s also those controversial situations, where a friend, family member or even myself is tested in a way we wish we weren’t.

In my writing I see out of those negative situations a way to overcome that obstacle. My stories depict many of these setbacks which I build into the characters I develop. 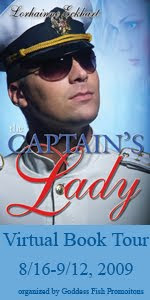 I find people fascinating, the way they tick. I’ve witnessed situations where someone has behaved dishonourably, dishonest, including behaviour that is morally reprehensible, especially where an innocent person is taken advantage of. And I wonder how such an injustice can be allowed.

But on the other hand I have also witnessed friends overcome great obstacles. What amazed me was how they handled that bump in the road with absolute grace and dignity.

The story and details I research in depth, but life experience around me is what I build into each story and characters I create.

Here's an excerpt of The Captain's Lady:

“We have no reports of a ship in distress in the area, Captain.”
“What about fishing 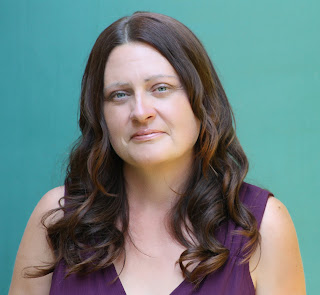 boats?”
“No, sir, no reports.”
Looking once more at his first officer, Eric issued curt orders, the harshness grating in his voice. “Send a rescue team to check it out.”
Handing the binoculars off to one of the crew members, he strode with determination off the bridge, heading directly to the ship’s launch. His well-trained crew scurried about. Joe appeared at his side and they watched from the rail as the small rigid hull sped off in the direction of the dinghy. His pulse rose and the dampness on his back soaked through his short-sleeved shirt.
“So what do you think?” Joe leaned on the rail, uncertainty clear in the crinkle of his brows.
“Don’t know, dammit.” Eric focused on the scene unfolding in the distance. Again he commandeered the binoculars from Joe and scrutinized the three-man team approaching, then securing the boat to the dinghy.
His senses were keen; over the years, he’d learned to trust them. The uneasiness that crept its way into his gut, the hairs now standing up on the back of his neck and the racing of his heart; this unshakable feeling was telling him that things were about to change—drastically. Puzzled, he felt the mounting frustration build inside, along with something else he could not quite put his finger on. Shaking his head, he realized it was not a feeling of dread.
The crackle of the radio interrupted his speculation. A voice from the rescue team came over the line. “There’s someone in here, a woman, and she’s in bad shape.”

Posted by Wendi Zwaduk and Megan Slayer at 6:00 AM

Thanks for stopping by Lorhaiine! Love the post. Great insight!

Hi Wendi,
Thanks so much for inviting me.
Lorhainne Eckhart

This sounds like one great read Lorhainne! Lookin' forward to it.

The Captain's Lady sounds incredible. Can't wait to read it!

Best of luck with your release, Lorhainne. It sounds wonderful.

Hi Catherine and J.A.! Thanks for stopping by. Hope you enjoy The Captain's Lady.

Good luck on your release Lorhainne. Sounds like a must read.

Thank you Mary, J.A., Catherine, and Ashley. I hope you enjoy reading my novel, and thanks for stopping by.
Lorhainne Eckhart

Hi Wendi and Lorhainne -- Loved the excerpt! Also enjoyed getting to know more about your work, Lorhainne. Thanks for sharing!

Thanks to everyone who posted and thank to Lorhainne for stopping by. I loved having you.

Remember to stop by the rest of Lorhainne's tour!

Lorhainne..what a cover for your book. I was very interested in hearing more about the book and would love to win a copy of it to really set down and enjoy. susan L.

Helen, I am pleased you liked the excerpt, thanks for commenting and taking the time to read more about my work.

And Susan, I love the cover too. One thing about The Wild Rose Press, the book covers are so awesome. To me it depicts the true Abby. And thanks for taking the time to stop in to learn more about my book and to add your comments.
Lorhainne