Today I bring you the fabulous writer, Sandy Lender. Her current work, Choices Meant for Kings is out now. Grab yourself a copy today. Here's her interview. Enjoy and please stop by her other stops on her Virtual Tour. You can win prizes and have lots of fun visiting new sites. As always, leave comments, we'd love to hear from you! You can find her other stops here:
http://goddessfishpromotions.blogspot.com/2009/08/virtual-book-tour-choices-meant-for.html 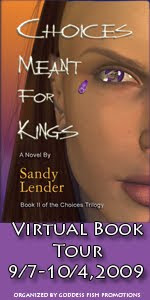 What’s your favorite part of the book? Why?
Sandy Lender: OMG, Wendi, you’ve asked the world’s hardest question! Kudos to you… I kinda had to address this question when I had to pick a scene to put on the inside front cover flap as a teaser. So I was trying to figure out what my favorite scene was. It’s sort of a toss-up among a few: this scene where Chariss blasts the crap out of this obnoxious king’s castle on the island south of Onweald; this scene where Jake Taiman has to rescue Tiatha; this scene where Chariss tries to kill a sorcerer by flinging herself (and him) over a cliff; and this horrible scene where Chariss is “supposed” to marry Nigel Taiman. The destruction of the castle won out for the cover flap, but I think the wedding scene is my fave because it’s so reminiscent of Charlotte Bronte’s Jane Eyre.

When you create your novels, do you know right away who will be the protagonist, or is it a process of letting the characters develop into their parts of the story?
Sandy Lender: Yep, always know who the good guy is. Now, there are some extras who surprise me with their roles or how they develop, but the main characters reveal themselves to me before I start writing. You’ll see in a few of the reviews I’ve already got on Amazon that characters aren’t always who they seem to be…and the readers are loving that. 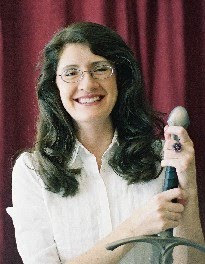 Where’s your favorite place to write and why? Did that place affect your current work?
Sandy Lender: I can write anywhere at any time, but I prefer my den with all my little “writing goodies” around me. I like having my reference books and candles, dragon paintings and favorite music…that sort of stuff. I think setting a mood influences some of the characters’ thoughts and actions, but it’s not essential to me. I can float into the world on Onweald and pick up where Chariss and Nigel are at the drop of a hat, whether I’m stuck in traffic or sitting on a plane or standing in the shower wishing I had a pen…

Thank you for the insightful questions. Maybe your visitors today will have more. I’ll be checkin’ in!
“Some days, you just want the dragon to win.”
Here's the blurb for Choices Meant for Kings:
Chariss is in danger. Her geasa is hampered by the effects of a friend’s marriage. The dashing Nigel Taiman hides something from her, yet demands she stay at his family’s estate where he and her wizard guardian intend to keep her safe. But the sorcerer Lord Drake and Julette The Betrayer know she’s there, and their monstrous army marches that way. When prophecies stack up to threaten an arrogant deity, Chariss must choose between the dragon that courts her and the ostracized kings of the Southlands for help. Evil stalks her at every turn and madness creeps over the goddess who guides her. Can an orphan-turned-Protector resist the dark side of her heritage? Or will she sacrifice all to keep her god-charge safe?
A Tense Little Excerpt From Choices Meant for Kings
By Fantasy Author Sandy Lender
http://www.authorsandylender.com
You won’t find this excerpt anywhere except Sandy’s current online book tour…

As the soldier stepped toward him, Nigel reached out his arm and caught him by the neck. He slammed the captain against the far wall. He pinned him there with his body, leaning against the man as if he could crush the wind from him with his presence.

He brought his face close to the soldier’s ear and spoke lowly, fiercely, so that no one could have overheard him. The menace and intent behind the words was as surprising to the captain as the words themselves.

“I asked you to accompany [Chariss] on this journey tomorrow because I have faith in your sword, and until this moment I trusted you to keep your distance from her. Now, I find her down here at your side with a look upon your face that suggests more than you realize. So help me, Naegling, the only thing that stays my hand is how displeased she would be if she learned that I sliced you open.”

“The look you see is merely my concern for her honor. Nothing more.”

“I’m not a fool. And I’ll use every last piece of Arcana’s treasury to pay the prophets to justify my reasons for marrying that woman, so you can unconcern yourself with her honor.”

Hrazon stepped off the staircase then and saw Nigel pressed against his guard.

“I still believe you’re one of the best soldiers Arcana’s ever seen,” Nigel continued, “and I want you at her side for this journey, but, so help me, Naegling, she comes back alive and well and not confused in the least about her affections for me, or I will string you up from a tree in the orchard and attach your intestines to your horse’s saddle before I send it—”

Hrazon cleared his throat. “Excuse me. Is there an issue here I should address?”
Posted by Wendi Zwaduk and Megan Slayer at 6:01 AM

Woo-hoo and good morning, Wendi!
I forgot to tweet about this so I need to go do that. I swear, there are too many networks to keep track of...
Thank you for hosting me today and I look forward to visiting with everybody!

Sandy Lender
"Some days, you just want the dragon to win."

Good afternoon! Been a crazy day. Gald you could make it and love the excerpt. Can't wait to get a copy of the book.