Drawn Together by Wendi Zwaduk 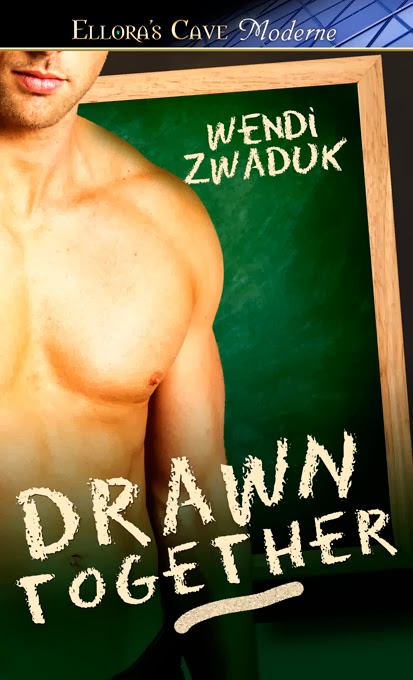 Graig Case wants to teach history and coach baseball. Plain and simple. But nothing in his life has been simple. He’s also got a secret. He loves to watch the sexy woman across the courtyard dance. He’d love for his fantasy girl to be his best friend, but fantasy and reality don’t always mix.

Tessa Martin has given up on love. She’s played second fiddle most of her life. Guys like hanging out with her. But being one of the guys doesn’t keep her warm at night. Still, she indulges in her one treat—dancing naked at night for Graig. No emotions involved means no one gets hurt.

Except when they end up working in the same school, in the same hallway. Then all bets are off.
Inside Scoop: This lucky hero gets to take control when his new girl encourages him to spank her.

And now a Hot EXCERPT:
Artists do it dirty.
He loved the poster on her wall. Such an odd item for the bedroom wall of an adult woman, but then again, he liked it, so maybe he was just as odd. Didn’t really matter. Once the woman caught him watching her, well, the game would be over.
Graig settled back into the easy chair he’d moved into his bedroom. He checked his watch once more. . Just about time for her to come into her bedroom.
He shouldn’t watch her. Shouldn’t be turned on by the sway of her hips as she shimmied out of her jeans. But damn. She moved like she knew he was there.
The light flicked on, bathing the room across the courtyard in warmth. Thank God they both lived on the top floor with balconies blocking the view to the apartments below. Any lower and everyone else would be able to see her. Blood pounded in his veins and heat flooded his body. Any moment now. The woman stepped into frame. She unwound the elastic from her hair and tossed her dark tresses over her shoulder. The scent of strawberry floated to him. Her perfume? The scent of her shampoo? Probably his mind playing tricks on him, but he didn’t care. He licked his lips. Just to grab hold of the silky locks and bury his face in them.
She looked so damn familiar, but he’d never ventured across the courtyard to get a better look. She reminded him of the minx from the school. Tessa didn’t strike him as the type to dance in front of an open window. She came across so stiff and proper, not at all like the vibrant babe he loved to watch. Maybe if she peeled back the layers surrounding her and lived a little. Maybe. God, he wanted her to be Tessa. The resemblance was uncanny.
The woman turned her back to him and rolled her shoulders. Graig rubbed his flattened palm across his torso. His nipples beaded. From his touch or the vision of her? Both worked for him. She rested her hands on her hips, drawing his attention to her ass. A nice, plush bottom, perfect for slapping during sex and sinful when she danced.
He prayed she’d turn on her stereo. Not for the music, although sometimes he caught faint snippets of her selections. He wanted the music to accompany her dance. God, he’d come in his hand just from watching her move to whatever sensual beat she blasted from her stereo.
She snapped her fingers and left the frame of the window. Graig shot forward in his seat. Oh hell no, this wasn’t allowed to be over so soon. His heart raced. “I am too attached to this mystery woman, but damn,” he mumbled and closed his eyes. “I’m not done.”
Graig gripped the arms of the chair, ready to vacate his bedroom. Without her on display, going to bed wasn’t in the cards. He opened his eyes and watched the window.
Tingles shot from his toes to his brain to his cock. She was naked.
“Whoa,” he whispered. Full breasts bounced with her every step. Pink tinged nipples pointed to him. A thin thatch of curls protected her pussy. His lips parted and he gasped for air. For the first time since he’d started watching her, she stared in his direction. Could she see him? She cupped her breasts, giving her nipples a squeeze. Had to be Tessa or her damned twin. Did she have a twin? Not that he knew of. He couldn’t help wanting the fantasy girl to be the woman he craved—to be Tessa.
“Come on, Tessa. Show me everything.”