Break Me in by Sara Brookes ~ Release Day Blitz! 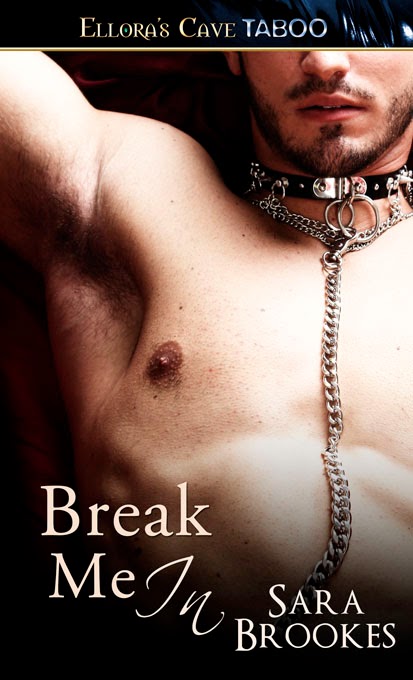 Elena avoids relationships by using her flogger as a shield. Alex is struggling with substance abuse and Elena will do nearly anything to help him conquer his demons, even risk losing him forever. When he comes home, whole and healthy, he raises the stakes by requesting their friendship turn to a D/s bond. His submission will change their dynamic forever. She convinces herself it’s just sex. Love and desire aren’t part of the equation.

Under Elena’s reverent command, Alex finds a comfort he’s always yearned for. He’s happier than ever as he spends his days slinging coffee and his nights bound and collared. Submitting to Elena exposes more than his strengths—it reveals a powerful attraction. Most of all, it uncovers their passionate love. He’s ready to convince her there’s no reason to mask her feelings, but his efforts are derailed when his toxic past resurfaces to annihilate their future.

Warning: A hunky, tortured barista. A seductive, stubborn Domme. Desire that can’t be tamed by cuffs, ropes and chains. And angst. So much drama and angst, John Hughes would be proud. Being bad never felt so good.

The tails of her flogger brushed against his calf as she moved behind him. Her body pressed against his, the swell of her breasts following the line of his spine as she dipped lower. She shimmied behind him, her breasts scraping against the heated flesh she’d lashed.
Need tore through him. Elena’s soft touch drew across his back and ignited the strips of red skin to burn the fire to rage anew. His gasp of shock married with his pleasure.
“You excite me, Alexander, with your wonder and enthusiasm. You aren’t sure if you can let someone else take control, let someone take care of you even though that’s what you desire. You want so much to hate what you’re doing right now, but your body is speaking a very different language. You’ll crave it soon, I promise you.” Her hand gently cupped one of his ass cheeks. “Your skin marks so beautifully here. Do you want to know how much you excite me?”
“Yes.”
Something shifted against his thigh and air rushed out of his lungs when he felt her bare breasts graze his skin. The tight points of her erect nipples pressed against the heated areas she’d marked. Everything inside him focused on those spots. She moved slowly, pushing the hard nubs against him even as he strained against his bindings.
“You taste so decadent here.” Her lips parted, her tongue dipping into the hollow of his back. “Potent. Wanton. Mine.” Her hand skimmed over his shoulder as she stood, her touch featherlight and a sharp contrast to the licks the leather had delivered. She moved, dipping her hands under his arms as she pressed her bare chest against his sweaty back. Her short nails scraped down his torso, scratching lightly over hard ridges of muscles strung tight with tension.
Her breath fanned his ear for a moment before she fisted her hand around his hard shaft. His chest hitched and he hissed out a breath at the heady sensation. Flesh, so delicate and feminine despite the rough touch, held him and measured the weight of his fully erect cock.
Her hand danced over his throbbing shaft, her fingers curling around to cradle him. Blood and adrenaline coursed through him, setting his entire body on fire. He strained against his bindings, totally at her mercy, as her hand slid down to the base.
As his skin quivered against her touch his lower body tightened in anticipation as she started to trace circles against his hip. She ran her hand so slowly up the length, convincing him she would never reach the head. But when she finally did she dragged her thumb over the tip, smearing the drop of pre-cum that had collected there.
Her hand began moving, up and down, on his shaft. The tension she’d just spent so much time building coalesced into a brilliant ball of heat at the base of his dick. He jerked a few times against her touch, desperate for relief. Panic began to override reason again when he realized her intent.
“Elena, no.”
“Don’t spill all over my nice, pretty floor, Alexander.”

I don't like them so perfect they make me snort in disbelief nor do I like them so flawed as to appear pathetic. I depend on my authors to find that happy median. BTW I love Think Geek and like to buy gifts for my grandsons there.