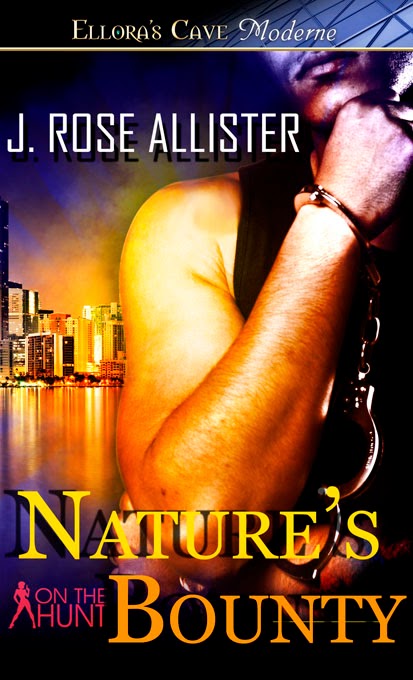 When Nature Antillean, aka Nate the Crate, poses as a male stripper to arrest a sexy-as-hell fugitive, he has no intention of taking his disguise all the way—until he meets her. Lydia Franklin is more than eager to take her gorgeous strip-o-gram for a wild ride, considering how desperately life on the run sucks. The resulting encounter is explosive, but ends with Lydia handcuffed and Nate honor-bound to take her to jail. The fireworks aren’t over yet, however, for Nate discovers he is now a victim of the same setup that got Lydia accused of a crime she did not commit.
With both of them declared fugitives, Nate must work with the woman he swore to bring to justice in order to defeat the plot and reclaim their lives. His hot body and stellar moves give Lydia plenty of motivation for teaming up in more ways than one, but she knows that the criminal he hopes to protect her from is one she must face—alone.

Excerpt:
Nate rehearsed his mental script one final time before he knocked on the door. The sharp rap sounded a little more like his typical I’ve-come-to-collar-you knock than he would have liked, and he winced at the sound. Normally he’d be shouting her name through the door. Instead, he stayed quiet and obeyed the instinctive urge to step aside from the door for a moment in case a bullet whizzed through in reply. When nothing splintered the wood, he moved back in place. No doubt stripper services didn’t lurk out of peephole range like creepy stalkers.
The silence after his knock lasted almost long enough for him to think she had either gone out or decided not to answer. He was pondering the next move when he heard a woman’s voice from close behind the door.
“Yes?” she asked cautiously.
Big mistake, lady, he thought to himself. In another incarnation, that would have been enough to put his foot through the door.
“Lydia Franklin?” he called in what he hoped was a friendly, nonthreatening tone.
Another pause.
“Who are you and what do you want?”
Maybe he was kidding himself, thinking he could play himself off as an innocent stripper boy. But then, any bail skip with half an ounce of brains would act paranoid at an unexpected visitor, no matter who was doing the knocking.
“I’m Antoine from Hot and Ready Exotic. Valerie sent me to deliver a very special birthday present to Lydia.”
Nate had no idea how a real stripper would handle a nervous Nellie at the door, and the long delay made him wonder if he’d blown it. There was a quick—very quick—shadow across the peephole, and he pasted on his best I’m-a-hot-guy-you-want-to-let-in smile.
In his head, old tapes played that featured him training a gun at the doorway while it was kicked or battered in. Shouts and commands and chaos would all feed the adrenaline surge that would accompany his forcible entry. The adrenaline surge was definitely on board, but the rest faded into memory while he waited, silent and smiling while she gave him the once-over through the peephole.
“Wait,” she commanded sternly, and he heard her move away.
It had to be her. He knew it. Patience began to waver with his target acquired, but he stood by and waited. He heard her talking soon after, quietly at first. He stiffened, wondering who else was in the apartment. Then came a cry of surprise that startled him into even higher alert, followed by an easy laugh. Suddenly, he heard her flipping door locks, and the door yanked open. It was Lydia all right, all five-foot-seven-inches of sexy blonde. She had a cell phone pressed to her ear and a seductive, welcoming grin on her face that was the exact opposite of the expression bond jumpers normally wore upon seeing him.
Mother of God, but the mug shot he’d thought was fairly decent hadn’t done the woman a single bit of justice. The California Beach Girl version of Lydia Franklin took every male chromosome in his body to DEFCON 1. Her feathery blonde hair fell in careless layers to spill over her shoulders, and the silken strands were the only thing obscuring the view of a baby-blue bikini and long-legged, pinup-worthy body that a Sports Illustrated model would have envied. Round, high tits strained against the shimmery fabric, and his cock promptly began twitching most inconveniently in its stripper pouch. To make matters worse, her aquamarine eyes were studying him every bit as greedily as he was eyeing her. In any other place—any other place—he would have been on her in a hot minute. That included the post office, the supermarket or a coat closet during Sunday School.
“Well, hello there,” she said, licking her lips to punctuate the seductive greeting. A particularly dirty thought cropped up while he watched her tongue moisten those plump lips.
He just stood there, holding his bag and balloons.
“Oh my, Val,” she said into the phone, “you have no idea how completely and utterly you have outdone yourself.”
Her eyes did things to him he could barely describe while they slid over every inch. His spine tingled under that gaze, and damn if her nipples didn’t stand up and salute after her visual tour. Something lower on his body began saluting as well.
She laughed at whatever response she got on the other end. “Have I told you that you are my absolute best friend in the whole world?”
There was no mistaking the sloppy rush to the words, a slur that told him she had started celebrating her birthday quite some time before he had arrived. That could either make his job easier or more complicated, depending on a number of factors. Drunks were unreliable at best, and quite often, they kept on going even after they got knocked down.
His quarry clicked off the call after kisses and thanks, and she opened the door wider. “So, do you have more for my birthday than just a ripe, round bunch of balloons?”
If she only knew what all he had. Starting with a ridiculously ill-timed boner and ending with the handcuffs in his pocket. Two things which, at the moment, didn’t necessarily strike him as mutually exclusive. This was bad. All kinds of bad.

Posted by Wendi Zwaduk and Megan Slayer at 9:41 AM

I have just installed iStripper, and now I can watch the best virtual strippers on my desktop.