Sunday Snoggin' with Play to Him

Play to Him by Wendi Zwaduk 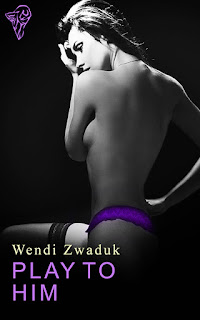 Rhiannon Dubois set out to find her own path in life—with her music, her career and what she wants in the bedroom. No more giving in to get what she wants. She's making her own rules.

Except with the billionaire playboy she can't get out of her mind.

Sebastian Chastain knows Rhiannon better than she knows herself. Despite her best efforts to hide her need for submission behind her independent streak, she blossoms when she relinquishes control. He's got the tools to jumpstart her career and he's not stopping until she regains her spot in the limelight.

She puts herself in his masterful hands, but can he also convince her to offer her heart?

Totally Bound: https://www.totallybound.com/play-to-him?author_id=125
Amazon: http://www.amazon.com/dp/B00ASNL6PM/
AllRomance Ebooks: https://www.allromanceebooks.com/product-playtohim-1031637-147.html
And a Hot Excerpt for your pleasure!
“Are you ready to play?”
“Yes, Sir.” A rush of adrenaline, much like when she strummed her guitar, rushed through her veins. Her nipples beaded behind the fabric of her corset. PLAY TO HIM Wendi Zwaduk www.total-e-bound.com 14
The collar dangled from his fingers. “And you’re willing to wear this and do whatever I ask of you?”
His husky tone radiated up and down her spine. Cream slickened the inside of her thighs from anticipation. “Yes, Sir.”
He secured the collar about her throat, then smoothed his fingers over her cheek to tip her gaze. “Kitten.”
Maybe it was the power in his voice or the strength he exuded when he stood in front of her, but a calm washed over her. All the things she had to control melted away and all of her insecurities evaporated when he collared her.
Sebastian pulled the leash from his pocket. When had he secreted all the gear? The chain made noise when he shook it out. Or had she been so entranced by him she had refused to notice? He clicked the leash in place on the D-ring, then let the chain dangle between her breasts.
“I want to strip you down to those boots and the stockings, but we have to venture across the building. I won’t have anyone else gawking at you.” He wrapped the free end of the leash around his hand. “Come.”
She took the assumed position and folded her hands behind her back once more, then bowed her head. She longed to trail her fingers over the sprinkling of stubble on his cheeks, but kept herself in check.
With him leading, she took two steps. Sebastian stopped. “On second thought…open.” Rhiannon opened her mouth and he placed the end of the leash between her teeth.
“I want a hint.” He loosened the ribbons at the front of her corset. The sides of the garment slipped free. No one would see anything from the front. If she moved or twisted, then she’d give a show. He crossed around behind her and tugged her skirt up past her hips. “A thong.” He groaned and kissed her bare shoulder. “So hot.” He nipped her skin. “And so unnecessary.” He gripped the thin material and pulled. The thong tore from her hips and bared her body to him.
She suppressed a wince. The thong cost more than a hundred dollars. But he expected her to wear the best.


“I owe you a new thong. One of these days.” He covered her with the skirt. “Or maybe I’ll require you to never wear undergarments in my presence.”