It's my day for Blissemas!! I love this time of year. Lots of presents and merriment for everyone.

For my part of Blissemas, I'll share one of my family's traditions. Every year at Christmas (and other times of the year, but especially at Christmas), my family and I go to the local stores. We don't shop for ourselves. We shop for pets. Not just our pets, but the pets at the local animal shelters.

About twelve years ago, I was at the local store and I'd seen a box to donate food and supplies to the local animal shelter. This box has the most pitiful picture of kittens on it. I won't go into huge detail, but the poor little guys were in cages and just looked so sad. I went right back that moment and bought stuff for the box. I suppose it was supposed to make me feel better. In a way it did, but in many ways, it didn't. I wasn't in a position to rescue any other critters, having a cat and dog already. But I figured if I could at least give the shelter some of the items they needed, I could do something. The next year, I increased the amounts I gave to the shelter--more dog food, cat food, kitten food, puppy food and cat litter.
Then the small person came along. Even when tot was small, we included tot in this tradition. Once tot got big enough to understand what was going on, tot encouraged us to keep the tradition going. We look forward to that day when we get the items for the shelter. We usually spend time there playing with the animals, too. This year will be a little different. We'll still make sure we bring supplies. Can't forget those. But this year, we're adopting a dog from the shelter. We'll be doing our part to bring one animal home for the holiday.

I know what you're thinking. Lots of people make the mistake of getting an animal for the holiday, only to give it back or give it away when the cute wears off. We won't be doing that. Why? The moment I saw the dog, I couldn't say no. I'm also the type that if I make up my mind to do something, I'll do it. No going back. Besides, the dog didn't do anything to be given back other than the cute wearing off. That's a load of hooey. The small cuteness might not be there, but you have to find the cute in everything they do. Dogs and cats can be your best friend if you open your heart. We certainly do.

Now for the other fun part of Blissemas! The presents! To join in on Blissemas, simply leave a comment on this post and the others at http://blissemas.co.uk and you could be in to win your choice of eReader or $100 gift voucher to spend on eBooks! The prize will be drawn on the 21st December. Merry Blissemas!

Now about my pen name's latest release and a tasty Christmas treat, Ribbobed! 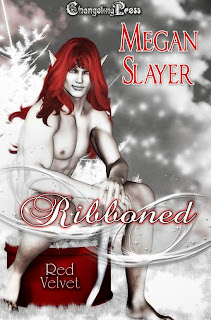 And now a hot excerpt!!
She clicked the handle and eased the door open. There, in all his red-and-green, towering glory, stood Raven. His blue eyes blazed and a grimace marred his face. “You were summoned ten minutes ago. Where have you been?” He folded his muscle-corded arms. “Hmm?”
His gravelly voice drew a shiver from deep in her being. She cleared her throat. No way she’d let him scare her -- not yet. “Once I picked my jaw up off the floor, I ran right down here.” And worked up her courage to talk to him. She rested her hands on her hips. “I thought maybe Santa was in the nog again and made a mistake.”
Raven stepped toward her. Unlike the rest of the elves, he didn’t wear a hat. His dark hair slid over his brow, obscuring her view of his eyes. “This request is very real and binding.” His voice dropped to a growl on the last word.
Her heart and brain warred. Working in the ribbon room was a year-round commitment. Unlike those in the other parts of the Christmas plant, the people who worked with Raven didn’t seem to have much of a social life. Then again, did she recall anyone admitting they worked with him? Looking at the strapping elf in front of her, she wondered if it was the binding part of the job that scared people.
Raven was the stuff of rumor and innuendo. He didn’t just use his ribbon for package decoration or house décor -- he dabbled in BDSM and used the velvety strips to bind his lovers. Her body tingled. Would he wrap her in nothing but his ribbons? Make her scream his name? Oh, holy night, she hoped so.
“I’m willing to take on the standard hitch down here,” she said, praying her voice hadn’t wobbled.
“Perfect.” His eyes glittered and a small smile curled on his lips. “Absolutely perfect.”
* * *
Raven widened his stance and drank in the sight of the tiny elf. She had no idea what the frost she’d gotten herself into. He suppressed a bigger grin. He loved newbies, especially ones with soft brown hair and crimson lips. His cock twitched behind the buttons of his pants. Something about her screamed innocence. She didn’t know how pretty she was. His jacket suffocated him. Pine nuts. Few women affected him, but she brought the arousal from deep in his soul.
Little did the faux-fur-wearing minx know just how binding the ribbon room could be.
“This is the Ribbon Room.” He put one arm around her shoulders and guided her to one of the three chairs in the room. “I prefer to work alone, but this year the requests for red velvet ribbon are on the rise. Santa agreed to my request for help.” He sat her down on the plush black velvet chair. “You.”
How’d she like that little revelation?
“Me?” she squeaked and stared at him. “I don’t know anything about ribbons other than they belong on presents.”
“I’ll train you.” In every way he knew how. “We’ll be working tonight until the wee hours. Can you manage?” Could she take the strain of working with him?
“Yes, sir.” She smiled and gave him a mock salute. “You tell me what to do and I’ll do it as best I can.”
Yes, she would. 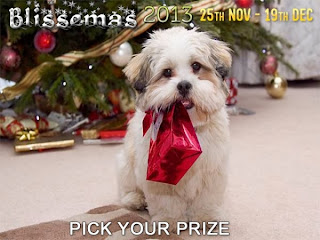 Oh my gosh, how cool is is that. Congratulations on you new pet and thanks for the ideas on how to help other animals.

What a lovely idea!

Pets aren't just for Christmas, they should become a part of your family, not just something to be disposed of when the novelty wears off and they're maybe not as cute as they were as puppies.

Enjoyed the excerpt. Thanks for the giveaway.

Wow what a beautiful thing to do for the animals and original too.Thank you for what you do. Merry Blissemas!!

That is awesome, what a great idea. Thanks so much for sharing that and for being a part of the giveaway

I love your family's tradition. All of our animals have come from rescue or shelter groups and they are just as much family as anyone. Mom-in-law calls them grandchildren!

What a thoughtful tradition! Great idea and lovely way to spread love during the holiday season.
Thanks for sharing the terrific excerpt with us!

For me, pets will always be family & if I could get away with it, I would bring every lonely baby home from the shelter. We will be adopting a kitten right after Christmas, since we will be out of town that week, I'm a little afraid that we might come home with more than 1 kitten, but it's a risk I'm willing to take. drainbamaged.gyzmo at gmail.com

Aww...those commercials for ASPCA have the saddest animals too.