Hump Day Humps with Sunshine of Your Love

My Hump is from one of my favorite recent historical books, Sunshine of Your Love. I totally feel the early seventies when I read back over it. Grin.


Sunshine of Your Love by Wendi Zwaduk 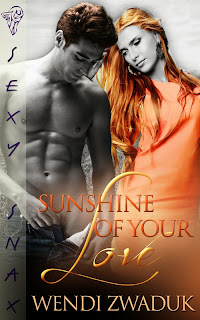 Recent Historical
M/F, Erotic Romance
Total-E-Bound Publishing
Available here:
Total-E-Bound: http://www.total-e-bound.com/product.asp?strParents=&CAT_ID=&P_ID=1752
AllRomance Ebooks:  https://www.allromanceebooks.com/product-sunshineofyourlove-924172-162.html
Amazon: http://www.amazon.com/Sunshine-of-Your-Love-ebook/dp/B009CT80FC/ref=sr_1_16?ie=UTF8&qid=1353095194&sr=8-16&keywords=Wendi+Zwaduk
BN: http://www.barnesandnoble.com/w/sunshine-of-your-love-wendi-zwaduk/1112938192?ean=9781781840597
It’s 1970. The world is in upheaval. Can two people really make a difference and find love at the same time?
Noel Flynt signed up for the Army to carry out his family duty. He never expected the travesties of Vietnam to take their toll on him. He’s coming back to the world he thought he knew, but with everything changing around him, he’s going to have to learn he can’t live in the past.
Cindy Stephens couldn’t wait for Noel to return. She sees the man within the uniform and has loved him for as long as she can remember. But times have changed. She’s not the timid schoolgirl any longer. Can she accept his changes, too?
The only constants are time and love.
Reader Advisory: This book contains one war hero, the woman who loves him, lots of hot sex, with a little spanking mixed in for good measure.
EXCERPT:
“Hey.” He cupped her chin. “If I learned nothing else over there, it’s that tomorrow is never guaranteed.” Noel wiped away one of her tears with the pad of his thumb. “I can’t say I’m not sorry she dumped me this way. Things probably wouldn’t have worked out, but I sure as shit wish Sophie had had the balls to tell me herself in person.”
“You don’t mean that.” Cindy scooted closer to him. “You two were the perfect pair.” Saying the words out loud hurt.
“I am far from perfect and I’m positive Sophie and I wouldn’t have had a future together. What she wants is now nothing like what I want.” Noel tapped her nose with his index finger, like he had when she was a child. “I’m not sorry and I’m not surprised. Sophie can’t handle things when the shit hits the fan. She wants the easy way out. I just hope the poor asshole knows what he’s gotten himself into.” He kissed her ring finger. “This looks better on your hand, like it’s supposed to be there.”
She touched his cheek, loving the scratch of day-old whiskers against the tips of her fingers. “Thank you.”
“That’s why you have it now.” He tilted his wrist. “My watch says it’s nearly seven. Why don’t we get out of this parking garage? Are you hungry? I’m starving. We could grab a late supper and talk.”
“Sure.” She cleared her throat. “Why don’t you drive?”
Noel offered his hand. “Yeah?” He helped her off the trunk of the car, but didn’t back up. The hem of her dress caught on his jeans leg, exposing most of her thigh. She wriggled to cover herself up, but he stopped her again. “Been a long time since I’ve seen something so sexy.” He smoothed the fabric, palming her thigh on the way down. “A long time.”
His lips parted and his breath warmed her skin. The musk of his cologne wrapped around her, enveloping her in his strength and masculinity. She placed her hands on his chest. His pulse thrummed under her hand. If she bounced on the balls of her feet, she’d be able to kiss him. His words came back to her. Tomorrow is never guaranteed. Then she’d take her chance today.
Cindy licked her bottom lip then captured his mouth in a kiss. Noel hummed and curled his arms around her waist. He tightened his grasp, holding her flush against his body. His erection jabbed into her stomach. Heat from him radiated along her nerve endings. His tongue tangled with hers. Feeling bold, she sucked on his tongue and ground her hips on his thigh. If they hadn’t been in the middle of the parking garage, she’d gladly have helped him initiate her trunk lid.
Noel pulled away first. A predatory look filled his brown eyes. “Get in the car.”

HOT EXCERPT:
Noel stood and shoved his pants and boxers to the floor, then fumbled on the floor for his wallet. He tore the foil packet and sheathed himself. He couldn’t remember why he had the rubber, but he appreciated it being there in the clinch. He crawled on top of her. “Relax, breathe and look at me. I’ll try to make this wonderful. Hug me, dig your nails in, whatever you need to take the edge off.”
He rubbed his cockhead over her clit, eliciting another groan from her. Her lips parted and her puffed breath tickled his cheeks. Noel palmed her breast and nudged the blunt tip of his cock into her pussy. Her eyes widened and she cried out. Damn. He’d figured sex would hurt the first time. Hell. He moved slower and murmured in her ear.
“Yes, Sunshine. God, yes.” He pushed a little more, seating himself fully within her, and stopped.
“Hurts,” she whispered. Her nails bit into his back.
Noel pulled out and moved a little, balancing himself on one hand and his knees. “Enough?”
Cindy shook her head. “Feels better. Fuck me.”
“Such dirty words.” Noel kissed her and added another light thrust. “You fit around me like perfection.” His balls drew tight. God, he’d blow in moments.
“Harder. Doesn’t hurt as much. Please?” Cindy hooked her ankles together at the small of his back.
Noel kept himself in check, but increased the speed of his thrusts. Each time he withdrew, her walls pulled him back in. He let go of her breast and planted both hands, one on either side of her head. Cindy whimpered and worked her pussy over his cock. Her body went taut and her fingers clamped around his arms. He groaned and emptied his seed into the condom. A thought crossed his mind. If she were truly his, the condom wouldn’t be necessary.


Cindy went limp and stared up at him with glassy eyes. Her eyelids drooped and a sleepy smile formed on her lips. She touched his cheek. “I love you.”