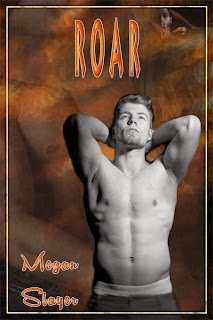 When the leaves turn and the air cools at Halloween, the shifters come out to play.
King has one chance for the entire year to find his mate. Halloween. Twenty-four hours to balance out the man and the animal. Will he be able to find her? Or will he be sentenced to another year locked within his lion’s form?
Tonya doesn’t believe in shifters, but she’s drawn to the massive lion at the zoo. The more she watches him, the more she wonders what secrets he hides. She’s not looking for romance on Halloween. Will she accept what she doesn’t understand...all in the name of love?
Available here:
Shara Azod Publishing: http://www.sharaazod.com/ebook/roar.html
AllRomance Ebooks: https://www.allromanceebooks.com/product-roar-1326402-149.html

EXCERPT:
She’ll be the death of me or my salvation. King strolled the length of the lion enclosure. Being in his animal form meant he could watch the visitors to the zoo with no interruptions. They gawked at him and the lionesses, and he snarled and strutted for them. Not a bad life—if he were just a lion. No, he had to be born a shifter.
He snorted and shook his head. That’d give his artist something to look at. He watched her. The saucy woman with warm brown skin churned something inside him. He wanted to see her, talk to her, curl his arms around her. Her scent wafted to him. She smelled of flowers and sweetness...things he hadn’t smelled in a long time.
She tipped her head and focused on the page again. Was she looking at him? Or admiring the lionesses? Goddess, he wanted her to be paying attention to him.
One of the lionesses strolled past him and sniffed, then continued on her way. He knew the score. He’d been sold into slavery by handlers wanting to give him to the zoo. He flopped on his side and stretched out.
If he’d found his mate before the handlers attacked him, he wouldn’t be in this situation. He wouldn’t be locked in a zoo with lionesses who hated him for not being an actual lion.
Two of the zookeepers entered the feeding room behind the rock face of the enclosure. If they only knew what he really was, would they let him out? Cage him up tighter? He snorted again. Their voices floated out to him, thanks to his hypersensitive hearing.
“If he doesn’t mate with the lionesses, we’ll have to bring in another one,” the female zookeeper said. “He’s not working out.”
Well, no shit. He wasn’t a full-blooded lion. The lionesses didn’t understand his shifter self. They wanted an animal. He glanced over at the artist again. She stared at him, her brow scrunched and her lips twisted, like she was deep in thought. A man sat beside her. King’s inner man growled. Odd, since usually the animal roared, not the man. His lion wasn’t real thrilled, either. Was she his mate? If the cat and the man both claimed ownership, then she could be. But the real wild card was her. If she didn’t accept him, he’d spend another year locked in his cat form. He loved the cat, but the man needed a chance to stretch and exist.
The zookeepers grabbed his attention again. “He’ll work out down in Cincinnati. They need a lion. He’ll be alone for a while, but he can handle it. I’ll start the paperwork. They won’t move him on Halloween, so we’ve got a couple days.”
Like hell. He wasn’t going to be lonely much longer, especially if it was indeed Halloween night. King sat up tall. He roared at the man next to his dark beauty. Get away from my girl.
King suppressed a snort. His girl? Who the hell did he think he was to claim her? She could reject him. The reality that he could be stuck for at least another year wriggled into his brain. The woman met his gaze and grinned. Smiling at him? He wrapped his tail around his legs in his best photographic pose. Or he could win her over.
She shook her head at the man and grabbed her phone. “I’m taking a picture. Leave me alone.” She nudged him. “Go.”
She’s not interested, asshole. Instead of his words, all she heard was his roar. Damn it.
The woman swatted the man’s hand away again, but this time Mr. Grabby got the hint and left her alone. Good thing. King nodded once as if to approve the man’s leaving.
“It’s like he’s watching me,” she murmured, then smiled at King. “I’m not sure I want to know what you’re thinking, but you look like you’re paying attention to me.” Yes, yes, he was paying attention to her. She met every one of his needs in the physical sense. Would she warm to him? He’d find out. He needed to get out—out of the zoo, out of his animal...and into her arms. Tonight. Yeah, time to get the hell out of Dodge and start his new life.