I thought I'd share one of my friend's books and since Ms Blisse is so dear, I thought you'd all like a tasty sample of her latest book, Sharing Nicely. 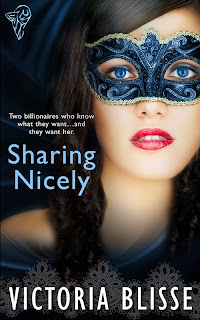 Two hot, sexy billionaires know what they want and they want her, but will they be happy to share nicely?
Kerry Matthews is used to stress—she runs her own high-end London club called Diamonds, but what she isn’t used to is attention from two very persuasive and powerful men.
Darren Bennett and Greg Stamford are life-long rivals, but call a truce to spend one night with sassy, curvy Kerry. They’re not content to share forever though. They both have a selfish desire to possess her completely.
Darren buys her seductive lingerie, flowers and chocolates, Greg flies her to Paris for a romantic break, cleans her flat and makes her breakfast in bed. Both vying to cement their place in her heart. She needs to decide between them but is dazzled by their persuasive personas and extravagant gifts.
Reader Advisory: This book contains a scene of MFM Ménage and some violence.

And now a saucy excerpt!

Bio: Victoria Blisse is a Mother, Wife, Christian, Manchester United Fan and Award Winning Erotica Authoress. She is also the editor of several Bigger Briefs collections, and the co-editor of the fabulous Smut Alfresco and Smut in the City and Smut by the Sea Anthologies.
Victoria is also one of the brains behind the fabulous Smut by the Sea Event taking place at Scarborough Library (UK) on the 22nd June 2013. A day dedicated to Erotica with a mini erotic marketplace and lots of Author Readings, Fun Giveaways and Exciting Talks.
She is equally at home behind a laptop or a cooker (She is TEB's Resident "Naked Chef") and she loves to create stories, poems, cakes and biscuits that make people happy. She was born near Manchester, England and her northern English quirkiness shows through in all of her stories.
Passion, love and laughter fill her works, just as they fill her busy life.
You can find often find Victoria procrastinating on Facebook http://facebook.com/victoriablisse , Twitter http://twitter.com/victoriablisse  and Pinterest http://pinterest.com/victoriablisse
To find out more check out http://victoriablisse.co.uk
Posted by Wendi Zwaduk and Megan Slayer at 12:30 AM