Blisse Kiss After Dark with Until the Night

It's time for the Blisse Kiss After Dark. Read the other Kisses here. But first, here's my contribution, Until the Night. Yummy vampire menage fun! 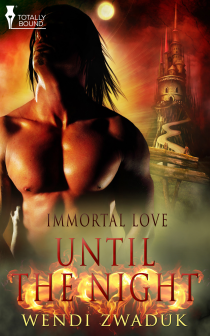 Kendall cupped her jaw in both hands. Hunger shone amongst the green and blue flecks in his eyes. He worked the muscle in his jaw and the light caught the subtle colour changes of brown and gold in the scruff on his cheeks. She gulped to catch the breath she didn’t need. No heartbeat anymore meant that oxygen didn’t help her body like it had when she’d been alive.
God, she wanted to be amongst the living and for things to be normal again.
“Would you rather I be blunt?” He kissed the tip of her nose. “I want you. I don’t care if you’re a vampire or if you have those two guys who hang out over here. You infiltrate my thoughts and make me think about you when you’re not in the same room.”
“Me?” Embarrassment gripped her. Back when she’d been alive, she wouldn’t have doubted a man’s attraction to her. She’d have known it and have run with the feeling of being desired. Since dying, she’d lost her confidence. Men looked at her, sure, but not in the same way.
“Yes, you.” His pupils dilated and Kendall rested his forehead on hers. “I don’t see a vampire. I see a sexy woman that I want to make my own.”
Gypsy closed her eyes and melted into his touch as his mouth met hers. He swept his tongue over the seam of her lips and she opened to him. She suckled on him. Heat burned through her veins and she ground her hips against his thigh.
He curled one arm around her shoulders while the other arm snaked around her waist. Kendall lifted her from the floor. She wrapped her legs around his waist, not bothering to break the kiss.
Mint, he tasted like mint. She broke the connection to keep from scratching him with her teeth. Hunger pangs racked her body. Just one tiny cut, just enough to sate her appetite…
Kendall carried her into her bedroom and collapsed onto the bed with her on top. Gypsy closed her mouth to keep from displaying her fangs. She whimpered.
“You need to bite me, don’t you?”
She shook her head. Taking his blood would enhance sex, yes, but she didn’t need to. She raked her nails down his chest, taking extra time to flick his nipples.
“Feels good.” He arched beneath her. “Touch me.”
Gypsy grabbed the hem of his T-shirt and pulled. Instead of moving the shirt up his chest, she tore it in half. The sound of tearing fabric split the air, followed by his laughter.
“Never had that happen during foreplay.” Kendall sat up with her still on his lap, and removed the torn clothing. “Your turn.” He eased her sloppy shirt up over her head.
Gypsy covered her breasts with her arms. A wave of humility swept over her. Would she make him happy? What a time to second guess herself…
“Show me, babe.” Kendall tugged her hands away, putting her on display. He palmed her breasts. The warmth of his touch filled her soul.
She moaned and leaned into him. Things made so much sense and none at all. Gypsy shook off the apprehension. She needed to feel, to be wanted and to hear a heartbeat.
Her nerve endings sizzled as he flattened his tongue over her nipple. He scraped his teeth over the engorged flesh and bit. Sparks shot from her breast to her pussy. Gypsy dug her nails into his shoulders. Holy hell, he knew how to use his tongue. Kendall gave her other nipple the same treatment. She shuddered in his arms.
The sweet scent of flowers swirled around them. Her fangs dropped and a voice whispered in her ear.
Mate.