Sunday Snoggin' with Still the One

The book doesn't release until October, but my part of the Switch Anthology is just what the doctor ordered for the Sunday Snog!!

So here's the snog!! 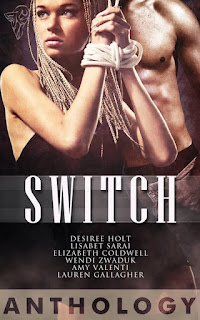 She'll be his salvation if he's willing to switch.

Being stressed out sucks, especially when you're in charge of a team. Just ask Eric Trask. The pit crew of the Fifty—Four truck team depends on him. The stress of keeping things running smoothly is wearing Eric down. What's a guy to do to get a little relief?

Janine Walters knows exactly what Eric's up against. She's the public relations face of the team. Pressure is all a part of the job. Her outlet for stress just happens to be wielding a crop.

Can Eric embrace her methods for stress relief or will her suggestion tear their fragile relationship apart?

“Janine, what are you doing? I wanted to do this to you, not me.” His voice dropped to a whisper. “I please you? Does that mean you think I’m sexy?”

She threaded her arms around his neck, rubbing her groin over his bound hands. “I,” she said between kisses, “am in control of what we do.” She feasted on his lips, licking his bottom lip and swiping her tongue over his teeth. The tastes of mint and cola exploded on her tongue. She ground against him, pleasuring herself against his thick fingers. “And I want to do you right here, right now, sexy man.”

Eric moaned and she backed away. Confusion burned in his eyes and colour filled his cheeks. Instead of giving him the lead, she reached forward and unzipped him. Red dusted his face and the tops of his ears.

“You’re not worried someone will see us?” he asked in a hushed tone.

“I’m not.” She pushed his jeans aside enough to stroke his cock through his boxer briefs. “They can’t see behind the car and, if you keep quiet, we won’t draw attention.” She worked his dick through the opening in his underwear and smeared her thumb through the pre-cum glistening on the tip of his cock. “Right now, you’re in my hands and my control. You will do what I ask of you.”

He stared at her, but didn’t tell her to stop.

“No coming until I tell you.”