Ever been to Cleveland? The home of Drew Carey's show, the Rock and Roll Hall of Fame, and NASA Glenn. No? Well, you can take a quick trip there in the Smut in the City Anthology. How? Because my story, Love of My Life is in that very anthology. Grin. I'm really excited. Here's the cover: 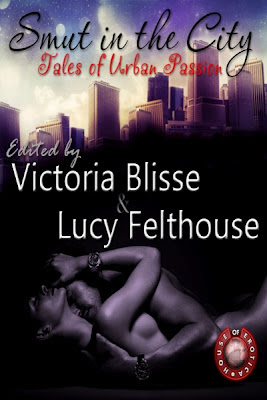 Like it? I do. Want to know who else is involved?

A long, hard Hammer by Sommer Marsden
A Tale of Two Sisters by Toni Sands
Glory Box by Cassandra Dean
Her Secret Garden by Viva Jones
Lights Out by MA Stacie
Mad fer it in Machester by Victoria Blisse
Love of my Life by Wendi Zwaduk
Neighbours by Harper Bliss
Taking Care of Business by Lexie Bay
Saturday on a Tuesday by Giselle Renarde
The conjuror by Tabitha Rayne
Underground Encounter by Tamsin Flowers
Verona by Geoff Chaucer
Within the Crumbling Walls by Lucy Felthouse

Here's the blurb for mine:

When two souls reunite, anything can happen in the city.

Zoe never forgot her first love. Then again, with Torin fronting one of the biggest rock bands in the world, he’s everywhere. He’s back in the city she loves, but does he want a second chance or just a fling? Better yet, can her heart weather losing him a second time?

Torin Michaels might be a rock star, but he’s not immune to heartache. Zoe’s the one woman he never forgot. Cleveland has always been her town. Can he make amends and make it their city?
Posted by Wendi Zwaduk and Megan Slayer at 10:30 AM