Wendi let me have the blog again because well, racing started this weekend. Yup. Irwindale had the Toyota All Star Showdown and in Daytona they had the Rolex 24. Now, I love me some Chevy muscle, and when I saw the new Camaro race car...yeah, I drooled worse than a sex-starved man in a nudie bar. 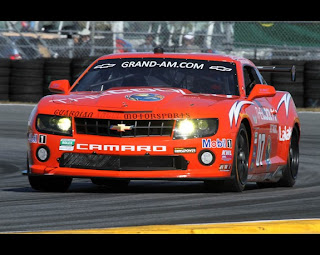 Dayum. It screams 'look at me, love me'

But its also near my most and least favorite times of the year. Favorite? Nascar season starts in about three weeks. I miss screaming around the track at 150+ mph.
Least favorite? Valentine's day. Why? Because the woman I love doesn't want a whole lot to do with me. It's my own damn fault. You probably remember me and Megan. She's one in a million. Hopefully my contract situation will be worked out soon and I can get back on track.

Here's to the worst of times leading to the best of times.