I wrote a review!

I know, some have told me posting a review is a scary idea. Why? I read the book. I LIKED the book. So why not tell everyone how much I liked it? 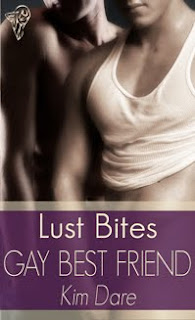 Book ten in the G-A-Y Series.

What's a straight man to do when he can't stop fantasising about dominating his gay best friend? Should he resist temptation or simply give in and enjoy?

Carlton knows Bryce better than he's ever known any other man. He's all hard edges and even harder attitude, all sarcastic quips and uncertain temper. He might be gay, but he's not the kind of guy who'd let another man push him around. He's not the sort of man who'd humour someone who can't even decide which way he swings either. And he's sure as hell not the type to submit to anyone. Or is he?

Carlton's got lots of questions. It's time for him to find some answers...

You never know where attraction will lead, unless you follow your heart. But that’s what Carlton has to realize.

Gay Best Friend is a great introduction into the genre of male/male romance. Why? It’s realistic. Plenty of authors write alternative lifestyle stories, but tend to make them formulaic. Not so with Carlton and Bryce. I could picture them in mind and felt the struggles Carlton went through. I could feel the tension and companionship between them as if I were right there with them.

The story flowed well, with tightly written dialogue and descriptive scenes to pull the reader into the book from the first word. Granted, Bryce is a bit tough to like at first, but as the tale progresses, he grows on the reader. Carlton is a great character because he's human--he deals with things the way I might in the same situation.

I liked that the book was realistic. Carlton’s strife was easily understandable to the reader. Who hasn’t been in a situation where you aren’t totally sure how you’d react until you have to decide? I know I have. Another thing that drew me to this story was the emotion involved. Things aren’t easy for Carlton. He’s convinced life should be one way—unless life involves being with Bryce. It was easy to understand his confusion and confliction. Is he gay or just really attracted to Bryce? Can a seemingly straight man truly be gay? And will he lose the friendship with Bryce if he takes things farther?

My favorite part was the evolution of the friendship. Ms. Dare wrote the characters in such a fashion that I felt like a voyeur in the room, but it kept me thinking about both Carlton and Bryce after the last page. And that is a sign of a good book—wondering what would happen to the characters after the story.

If you want a story with tons of heart, then you need to read Gay Best Friend.
Posted by Wendi Zwaduk and Megan Slayer at 8:24 PM

This sounds really good. I'll have check it out.