Linda Poitevin - An Author You Should Know!

Welcome brand new author Linda Poitevin! She's the author of A Fairy Tale for Gwyn available from The Wild Rose Press. You can visit her at her website:
http://lindapoitevin.com/
and follow her blog tour here:
http://goddessfishpromotions.blogspot.com/2009/12/virtual-book-tour-linda-poitevin.html

Make sure to comment. The more you comment, the better your chances to win a great prize!

Here's the blurb for A Fairy Tale for Gwyn:

Ever since her ex-husband walked out four years ago, abandoning her with a toddler and infant twins, Gwyn has been mother, father, and bread-winner all rolled into one. Her own scarred heart and failed marriage aside, she is determined not to open up her children’s lives to the possibility of another heartbreak...until her very own fairy tale falls into her lap -- and the hero won’t take no for an answer!

Hello, Wendi, and thank you SO much for the interview. A Fairy Tale for Gwyn is my first published book and I cannot tell you how excited I am...your support means the world to me! 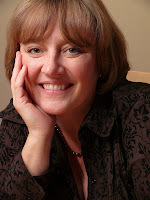 What t-shirt saying best describes you and why?
This is where my daughters would tell me I'm hopelessly out of step, because I don't even know what the current sayings are! I went online to look some up, but wow, a lot of them out there are really rude these days...not me at all. I suppose I'd probably have to have my own printed up with one of my favorite sayings, probably something positive such as "Niente senza gioia," which means "nothing without joy" (that one is actually getting painted above my kitchen doorway, where it will serve as a reminder on all of those days!).

We all have those embarrassing moments that we want to forget, but which one is really funny is retrospect?
No hesitation on this one! Every year in high school, we had "Greaser Day" where we dressed in 50s style. In Grade 10, I got my dates messed up and went dressed in a poodle skirt and bobby socks a full week early...and had to stay that way all day because we lived too far away to go home and change! Not the kind of thing you want to do as an already awkward adolescent. But wait, it gets worse!!! The next year? Yup, you got it. I did the exact same thing. Same event, same goof. I still cringe at the memory...
Posted by Wendi Zwaduk and Megan Slayer at 7:00 AM

Nice to meet a fellow Ontario Rose, Linda. Congrats on your first release! Wishing you many happy sales. =)

I have A Fairy Tale for Gwyn on my TBR list. Sounds great! Good luck on the tour, Linda. Wishing you many, many sales!

Thank you, Jaime! I hope you enjoy the book...and after visiting your site, I've just added Dead/Undead to my own list. :)

Thanks so much, Lainey! It was a fun interview to do, too -- thanks to Wendi's wonderful questions! And all the very best of luck with your own books...nice website you have!

Hi Linda! I can't wait to get my copy. Great excerpt.

Thanks, Wendi - and thanks so much for the interview. I loved your questions and had great fun answering them!

Hi Linda,
Great interview. I'm counting the days until I can get my copy of your book.

Thank you, Brenda! I really hope you enjoy it!

I enjoyed your interview blog Linda. I feel the same way about so many things.
I used to live in Ottawa. I loved it there. My father was a diplomat at the American Embassy there. I really loved the changing of the guard at Parliament Hill, which was across the street from the Embassy building.
I miss living there. It's a beautiful place. I even included it in my second book. Only it was in the late nineteenth century not today.
Looking forward to the book, the excerpt grabbed me.

How very cool, Mary! I'm ashamed to admit it, but I've lived here for 23 years and I've never seen the changing of the guard...high time I made the effort! What's the name of the book that features 19th-century Ottawa? I want to check that one out for sure!